The Bryce Report was a propaganda coup of the highest order. It was translated into 30 languages and dispersed across the globe by every British propaganda service. In the United States, the New York Times of 13 May 1915 ran Bryce’s ‘verdict’ on three full pages, over twenty-four columns, with pictures and unequivocal headlines. A measure of their clear success may be derived from the opening passage which began by stating that 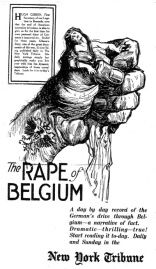 ‘Proofs of the atrocities by the German armies in Belgium – proofs collected by men trained in the law and presented with unemotional directness after a careful enquiry are presented in the report…headed by Viscount Bryce, the famous historian and formerly British Ambassador at Washington’ [1]

With headlines that screamed ‘German Atrocities Are Proved’ and ‘Premeditated Slaughter in Belgium’, ‘Young and Old Mutilated’, ‘Women Attacked, Children Brutally Slain, Arson and Pillage Systematic’, ‘Countenanced by Officers’, ‘Wanton Firing of Red Cross and White Flag’, ‘Prisoners and Wounded Shot’, ‘Civilians Used as Shields’, the New York Times could hardly have bettered itself in supporting the allied cause.

However, the American Irvin Cobb, in Belgium in 1914 as a correspondent for the Saturday Evening Post, wrote:

‘I had been able to find in Belgium no direct proof of the mutilations, the torturing and other barbarities which were charged against the Germans by the Belgians …fully a dozen seasoned journalists, both English and American, have agreed with me, saying that their experiences in this regard had been the same as mine.’ [2] 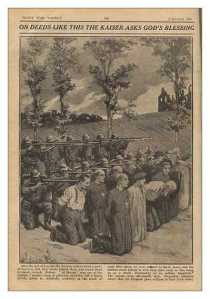 Another American, lawyer Clarence Darrow, was similarly sceptical. In 1915 he visited France but was unable find a single eyewitness who could confirm even one of the Bryce stories. Increasingly unconvinced of the allegations that had apparently been substantiated by Bryce, Darrow announced he would pay $1,000 to anyone who could produce a Belgian or French boy whose hands had been amputated by a German soldier. He found none. [3]

War, any war, harbours atrocity, it goes with the territory. It must never be excused, but it happens. Far from Belgium the massive Russian army was invading East Prussia. The civil population in the region offered no resistance, but of the 2 million plus inhabitants, more than 866,000 were driven from their homes. Some 34,000 buildings were burned to the ground, 1,620 civilians murdered, and over 12,000 were sent to Russia as prisoners. [4] None of these atrocities were ever reported in the British or American press. Who cared, they were Germans after all.

The original basis for the atrocity stories from Belgium came in the first weeks of the war between 4 August and the start of September when raw German conscripts were met head-on by patriotic Belgians, military and civilian. Bryce recognised that ‘the invaders appear to have proceeded upon the theory that any chance shot coming from an unexpected place was fired by civilians.’ [5] No-one challenged that hostages were taken, buildings destroyed and groups of ordinary citizens executed. [6] 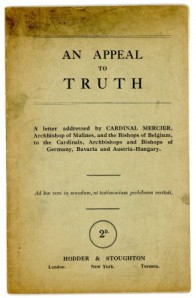 Nor can it be denied that a number of priests and teachers were executed or deported, Joseph Mercier, Archbishop of Malines, the most senior and powerful of the Belgian Catholic hierarchy quickly emerged as the national figurehead for the embattled population in occupied Belgium. He used his many contacts within the College of Cardinals to pressurise the German governor von Bissing to have his priests released from internment. Mercier wrote openly of the ‘massacre of 140 victims at Aershot’ [7] and stated in a letter to his German counterpart, Cardinal Hartmann of Cologne, dated 28 December 1914, that he ‘was personally acquainted with hundreds who have been victims…and am in possession of details that would make any fair minded man shudder’. [8] However, when he in turn was asked by the German governor to produce evidence concerning the alleged outrages committed against nuns, Mercier refused on the grounds that it would be too upsetting for nuns to be questioned, and much of what he had heard was given to him in due confidence. Governor von Bissing concluded, ‘it is enough to state now that neither your Eminence nor the other Bishops can provide any proof based on facts’. [9] But the stories of the rape of Catholic Belgium ran and ran.

Propaganda is so much more potent when laced with some truth. The rumours, opinions, exaggerated accounts and barrack-room stories were dignified by Viscount Bryce and his team as a true record. If we could refer back to the ‘evidence’ they used then perhaps the sceptic might be convinced. Unfortunately the names and addresses of all of the witnesses whose depositions were so carefully catalogued by lawyers have disappeared, as have the depositions. We don’t know how objective the questioning was or how many statements were the product of leading questions. We do know now that a great quantity of evidence was based on second or third hand information. In H.A.L. Fisher’s biography of Viscount Bryce, the Secret Elite historian claimed that the main body of the report had not been disproved, and each story should be considered true until proven false. Was the burden of proof against the German soldiers not the responsibility of Bryce and his committee? We will never know. Although they were originally placed in the vaults of the Home Office for safe-keeping, all of the proceedings of the enquiry were subsequently destroyed. But the damage done to the reputation of the German army, and the subsequent increases in volunteer enlistment in Britain, was priceless.