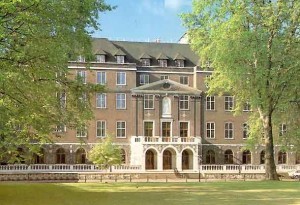 In addressing the Anglican Bishops and senior clergy at Church House, Westminster in February 1915, the Archbishop of Canterbury stated the old justification that he did not “entertain any doubt that our nation could not, without sacrificing principles of honour and justice more dear than life itself, have stood aside and looked idly on the present world conflict.’ [1] He was repeating, almost word for word, Sir Edward Grey’s statement of 3 August 1914. The concept of a Christian duty to fight was virtually universal among the Anglican clergy. Few if any said otherwise from within the ranks of the Church of England. Given such unanimous support for the war by even the most liberal of Anglicans, it is not surprising that the pulpit became an adjunct for the recruiting office. The Archbishop went so far as to state that it was their sacred privilege to bid men ‘to respond ungrudgingly to their country’s call’. [2]

Ponder these words for a moment. Young men, sitting in quiet country churches or great gothic cathedrals were exhorted to go to war, to do their duty, to accept the sacrifices. Their emotions were constantly battered by sermons drawn from the Old Testament that extolled the wrath of an avenging God. How did they feel when the pastoral shepherd dropped the mantle of Christ the Peacemaker and became a bitter recruiting sergeant? Priests and Pastors would often stress duty and equate fighting for Britain and the Empire with fighting for Christ. [3] Others railed against cowardice. The master of St. Catherine’s College, Cambridge said of those who refused to volunteer,

‘It is a pity that we cannot brand that sort of man “Made in fear of Germany.” Would to God we had known when they were born that they would eat our bread and grow and live amongst us, trusted and approved, and yet cowards. We need not have prayed and worked for them.’ [4] 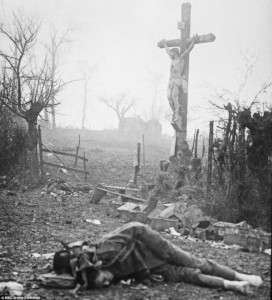 Can you imagine hearing your own brother or son described in such outrageous terms? With what sense of self worth would a young man be left, who internalised these damning words? It was moral blackmail of a nefarious kind.

In the early months of the war a further disconcerting practice of church recruiters was to appeal to the female relatives of potential recruits to take up the cause at home. Men who had not enlisted were ridiculed in the street by middle-class women inspired from the pulpit to taunt and embarrass them into the recruitment centre. At the same time, parents whose sons had enlisted were praised, and bathed in their reflected glory until the true nature of the war was revealed in the lists of dead and missing.

But the most outrageous proponent of the ‘virtuous war’, the prelate who stepped well over the line of Christian decency was the Bishop of London, Arthur Winnington-Ingram. He was an Oxford man who worked hard for the poor in the East End of London and was consequently popular with the people of Bethnal Green. With the blessing of Lord Salisbury in 1901, Winnington-Ingram was appointed to the Bishopric of London and enthroned at St Pauls Cathedral where he remained for thirty eight years. [5] He was one of the most outspoken and patriotic advocates of the war, beloved by the War Office and the Admiralty, who feted him on his visits to front line troops and naval installations.

Winnington-Ingram claimed to have added ten thousand men to the armed services with his sermons and other recruiting crusades. He made no estimate of how many died or were maimed needlessly because of his work for God and country. As Bishop of London, he never shrank from the enthusiastic endorsement of the righteousness of the war and the British cause and the important role the Church of England must play in the whole affair. His favourite text was; ‘better to die than see England a German province’. In return, he was given the second highest award for chivalry for his war service by King George V  who appointed him Knight Commander of the Victorian Order, [6]

Winnington-Ingram’s pronouncements veered from the concerned to the banal. Speaking at a ‘Rally without Shame’ at Westminster Church House in February 1915, he said that the Church had to foster and increase the fortitude of the nation; to comfort the mourners and inculcate a happier and brighter view of death. [7] What  did that involve? Cheer up, your only son is dead? Don’t get too upset; it was all in a good cause? His concept of comforting the mourners did not extend to the enemy. It was an odd kind of Christianity. Winnington-Ingram will long be remembered for words of a very different kind.

After a year of war, the Bishop called for the men of England to

“band in a great crusade -we cannot deny it- to kill Germans. To kill them, not for the sake of killing, but to save the world; to kill the good as well as the bad; to kill the young men as well as the old, to kill those who have showed kindness to our wounded as well as those fiends who crucified the Canadian sergeant, who superintended the Armenian massacres, who sank the Lusitania… and to kill them lest the civilisation of the world should itself be killed.” [8]

Apologists have claimed that these words have been taken out of context, but it is difficult to imagine any context at all in which they could comfortably sit. Dress these words any way you can but they will still reflect a blood-thirsty crusade against Germany. Winnington-Ingram went further by adding, ‘as I have said a thousand times, I look upon it as a war for purity, I look upon everyone who dies in it as a martyr.’ [9] British, of course; one can only assume that Germans went to hell. This is a theme he returned to time and again. He wrote in his sermons, ‘this nation has never done a more Christ-like thing than when it went to war in August 1914…the world has been redeemed again by the precious blood shed on the side of righteousness.’ [10] In words that have been repeated to spur the modern-day jihadist, Bishop Ingram invoked the God of war.

He was also ready to absorb every word of anti-German propaganda and repeated stories of atrocities without caution. His reference to the crucified Canadian soldier was one such myth that circulated early in the war. It was a vicious lie wrapped in fear and loathing to inspire vengeance. Propaganda was an important source for the tales of unforgivable German wickedness the Churches were willing to perpetuate. Clergymen of all faiths became

both participants in and victims of propaganda. Many Anglican ministers found it hard to believe that civilized Germans could be responsible for the atrocities claimed in the initial stories. However, the burning of Louvain and especially the university library, the horrors of the Bryce Report [see blog of 10 September] and the sinking of the Lusitania were all instrumental in changing their minds. Once their faith in German civilization had been breached, nearly every atrocity story in circulation was accepted and transmitted to their flocks. [11] They took their texts from a different Bible, one written by the propagandist at Wellington House or an unnamed journalist from the Northcliffe stables.

Perhaps the last word should go to Brigadier-General F P Crozier, who wrote in his book, ‘A Brass Hat in No-Man’s Land’:  ‘The Christian churches are the finest blood-lust creators which we have, and of them we made free use.’