If the Admiralty’s planning for the seaborne attack had been poor, the organisation for the military campaign was shambolic. As Les Carlyon put it so succinctly, ’Instead of being planned for months in London, down to the last artillery shell and the last bandage, this venture was being cobbled up on the spot, and only after another enterprise, the naval attack, had failed.’ [1] The only operation of similar stature that could be compared with this lay thirty years ahead on the beaches of Normandy, and the planning for that amphibious landing took not three weeks, but nearly two years. [2] Ellis Ashmead-Bartlett, British war correspondent at Gallipoli, wrote that no country other than Great Britain would have attacked the Dardanelles without months of reflection and preparation by a highly trained general staff composed of the best brains of the army. He added, ‘Never have I known such a collection of unsuitable people to whom to entrust a great campaign, the lives of their countrymen, and the safety of the Empire. Their muddles, mismanagement, and ignorance of the strategy and tactics of modern war brought about the greatest disaster in English history.’ [3] Ashmead-Barlett had, of course, no inkling that the chaos was orchestrated; no idea that third rate commanders had been deliberately chosen to ensure that the campaign would not succeed.

Military leadership was barely functional. [4] The War Council had considered neither tactics nor logistics for an amphibious assault on the peninsula, and until 12 March 1915 had not even chosen a commander. General Sir Ian Hamilton, like Vice-Admiral Carden before him, was selected while eminently more suitable senior officers were overlooked. The genial Scot, then in the twilight of his career, had been Kitchener’s chief of staff during the last months of the Boer War. He was hamstrung by his long-subservient relationship [5] and never once did he challenge Kitchener’s authority. Hamilton was scared of him and the depth of his fear can be gauged from a comment he made in his diary about requesting more troops, ‘Really, it is like going up to a tiger and asking for a small slice of venison.’ Hamilton’s trepidation was based on his experience in South Africa where he witnessed Kitchener’s response to an officer’s appeal for reinforcements by removing half his troops. [6]

Hamilton later recalled how stunned he was when he first learned of his appointment. ‘Opening the door I bade him good morning and walked up to his desk where he went on writing like a graven image. After a moment he looked up and said in a matter of fact tone, ‘We are sending a military force to support the fleet now in the Dardanelles and you are to have command. At that moment K wished me to bow, leave the room and make a start … But my knowledge of the Dardanelles was nil, of the Turk nil, of the strength of my forces next to nil. … K, went on writing. At last he looked up again with, “Well?”’ [7] It is patently clear that Kitchener treated his Boer War subordinate with contempt.

Hamilton was told he would be leaving next day with his staff. ‘The politics of the war, especially those concerning Russia, were driving everything and time was of the essence’, [8] but neither Kitchener nor anyone else had any clear idea about what Hamilton was to do. General Callwell, Director of Military Operations, was brought into the office to give a cursory briefing. He advised that the Greek General Staff had recently studied the possibility of an amphibious landing on the Gallipoli peninsula and estimated that 150,000 men were essential if it was to stand any chance of success. Kitchener dismissed this as nonsense, telling Hamilton that half that number would do him handsomely. [9] Strange indeed, because just two days earlier at a War Council meeting Kitchener himself had stated that a force of 130,000 would be required. [10] Admiral Jacky Fisher, who correctly forecast disaster, had insisted that it would need 200,000 men. [11] Initially, only 75,000 were sent. That might have been enough men ‘for garrison duty around Constantinople and for raiding parties on the way there, but Hamilton didn’t have the numbers to make opposed landings against six Turkish divisions.’ [12] The number of men actually sent in the first instance was predicated on the fleet getting through to Constantinople, not on the numbers required for a successful amphibious attack after the navy had failed.

Kitchener was surely aware that 75,000 men would not be enough, but he assured Hamilton that if a British submarine ‘popped up’ opposite the town of Gallipoli and waved a Union Jack, ‘the whole Turkish garrison on the peninsula will take to their heels…’ [13] How typical of the arrogance and inbred racism of the British imperialist. Like the deferential schoolboy anxious not to provoke the wrath of an authoritarian headmaster, Hamilton didn’t ask for more men lest he upset Kitchener. [14]

He wasn’t the only officer taken aback by the proposed campaign. General Wolfe Murray, Chief of the Imperial General Staff (CIGS), and General Archibald Murray, (Depute CIGS) were then called into Kitchener’s office, together with Major-General Braithwaite who had been appointed as Hamilton’s Chief-of-Staff against his wishes. [15] Incredibly, none of these Staff Officers had heard of the Gallipoli scheme and ‘the Murray’s were so taken aback that neither of them ventured to comment.’ [16] They had been kept entirely in the dark. The plan was so secret that even the Chief of the Imperial General Staff had not been party to it. Why? How could such a major strategic development come as a surprise to officers at that level? Quite reasonably, Braithwaite ‘begged’ that the expedition be given a contingent of up-to-date aeroplanes, experienced pilots and observers, but Kitchener turned on him, ‘Not one!’ The spotter planes that were provided were old and so heavy that ‘the damned things could barely rise off the water’ and out of rifle range. [17]

Look at the common factors here. Just as Churchill had placed an old subservient Admiral in charge of an ageing fleet, so Kitchener appointed a similarly pliable General to take command of the military force. Both were inadequate and unfit for the task. Nothing that was valued was put at risk so they were instructed to operate with insufficient men and decrepit equipment. Once again, experienced officers who disagreed, said nothing.

Next morning, General Hamilton returned to the War Office for his final and only briefing. Kitchener had penned three different sets of instructions, none of which helped Hamilton understand the enemy, the politics or the country. He was left to his own devices. Thirteen officers had been hurriedly assembled to serve on his staff. Only one had seen active service in the war and one or two, according to Hamilton, had hastily put on a uniform for the first time in their lives with ‘Leggings awry, spurs upside down, belts over shoulder straps!’ He knew none of them. [18]

Hamilton sought up-to-date information about Gallipoli and the Turks from Military Intelligence but all he was given were two small tourist guidebooks on western Turkey, an out of date and inaccurate map that was not intended for military use, and a 1905 textbook on the Turkish Army. The Intelligence officers were unable to assist with any information on weather patterns in the region, and nobody had given thought to the sea currents that would cause such problems during the landings. Nobody could say how many enemy troops were on the peninsula, or name the Turkish and German commanders. [19] It was literally unbelievable. 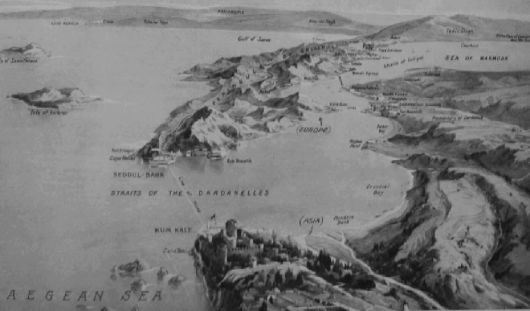 It was also untrue. In fact, inside the Foreign Office, the War Office and the Admiralty, there were volumes of up-to-the-minute intelligence on Gallipoli and Constantinople gathered from missions, ambassadors and military and naval sources. Between 1911 and 1914, successive military attaches at Constantinople, and vice consuls posted to the Dardanelles at Chanak, had sent detailed intelligence reports on the Dardanelles defences to the War Office. These were never disclosed to Hamilton or his staff. Lieutenant-Colonel Charles Cunliffe-Owen, the British military attache at Constantinople had conducted a detailed survey of the Dardanelles and Gallipoli and on 6 September 1914, sent these highly accurate reports and assessments to General Callwell, Director of Military Operations at the War Office. [20] They included information on gun sites, minefields and the topography of the peninsula. Hamilton was clearly desperate for facts and figures about Gallipoli and the Dardanelles, yet General Callwell withheld the vital information he had received from Cunliffe-Owen. Here was the most senior officer who had studied the Dardanelles in the intelligence department before the outbreak of war, [21] had received Cunliffe-Owen’s reports, had access to all of the information gathered from a range of military personnel stationed in Constantinople and the Dardanelles, yet kept it from Hamilton. [22] Why did the War Office leave Hamilton to cull his facts from tourist guides and outdated maps? Why did General Callwell remain silent? There can be no rational reason other than he was ordered to. His silence would otherwise have equated to treason.

Had the War Office tried to furbish Hamilton with expert advice and local knowledge, Admiral Limpus’s reports would have been brought from the Admiralty; Ambassador Mallet could have advised him in person. Had they wanted him to have the benefit of detailed military intelligence, Cunliffe-Owen would have been included among his staff officers. He was one of very few who had seen Gallipoli on the ground. Why was his wealth of knowledge and experience unwelcome?

Before Hamilton set off for the eastern Mediterranean on 13 March, on HMS Foresight, he went to say goodbye to his former chief, but Kitchener did not even wish him good luck. [23] Hamilton was equipped with little more than enthusiasm and wishful thinking. No attempt had been made to co-ordinate intelligence about the defences at Gallipoli, not even at strategic level, and he had been given no indication of Government policy, priorities or plans. [24] According to the principles laid down in Field Service Regulations, he should have been given an outline plan of the operations he had been tasked to undertake. This was the clear responsibility of General Wolfe Murray, the CIGS, and General Callwell, Director of Military Intelligence, but no plan was produced and all detailed up-to-date intelligence was withheld.

Ian Hamilton was chosen to command the operation for the following reasons: (1) He was considered incapable of performing the task. (2) He knew nothing of Gallipoli or its defences. (3) He would never challenge Kitchener’s orders, no matter how outrageous. (4) Like Admiral Carden, he made the perfect patsy when the Gallipoli campaign failed. It has been suggested that, from the outset, Hamilton was the victim of gross dereliction of duty on the part of the General Staff, [25] but it went much deeper than that. Make no mistake, this was no act of stupidity, dereliction of duty, or a ‘cock-up’. Hamilton did not appreciate it, but without a combined operation with the navy and at least 150,000 well equipped troops, he could never succeed. He was not appointed to succeed. Consider this; ‘At a moment’s notice he had been given an impossible task to perform, and somehow or other he must perform it. It wasn’t bricks without straw – it was bricks without clay, straw, kiln, hod, or anything else.’ [26]