When the Lusitania was torpedoed on 7 May 1915, a veritable avalanche of accusations, half truths and obfuscations filled newspapers and propaganda machines across the globe. On the face of it, a trans-Atlantic passenger liner had been deliberately targeted and destroyed by a German U-Boat with the tragic loss of  1,195 civilians, including 124 neutral Americans. It was a propaganda disaster for the Germans and a coup for the Allied cause. Unfortunately, even today, the truth remains mired in the disinformation and lies that grew through the tragic loss. Admiralty telegrams and wireless communications have gone missing. The claims and counter claims made against the Cunard Captain are still the subject of debate. Some of the more blatant lies have been uncovered in recent years, but still the Lusitania rests uneasily on the Atlantic bed, just off the south coast of Ireland, an underwater monument to those that the Secret Elite willingly sacrificed in their war.

The Lusitania was not an innocent trans-Atlantic Liner, nor was she built to be. An agreement had been signed on 30 July 1903 between the Admiralty and the Cunard Steamship Company whereby the Treasury agreed to provide a loan of  £2,000,000 for two ships [1] at a much reduced level of interest, (2.75% rather than 4.00% ) which could in time of war be used to ‘command the Atlantic’ and use their speed to carry supplies from America to Britain. [2] Crammed into an all-night sitting of the House of Commons on 2 August 1904, a much shortened debate on the issue saw the Liberal opposition speak out against an agreement which they deemed very much in Cunard’s favour. The political posing meant nothing for, one year later, when the Liberals formed a government, the men who spoke out against the Cunard deal, Sir Edward Grey, Winston Churchill and David Lloyd George made no attempt to cancel the agreement. Indeed the loan was extended to £2,6000,000 [around £245 million in today’s terms] and the company received an annual operating subsidy of £75,000 per ship, and a mail contract worth £68,000 per annum. This secret pact had at its core an agreement that the ships would be built to Admiralty specifications so that they could be used as auxiliary cruisers in time of war. [3] The two ships, one built at John Brown’s yard on the Clyde, and the other by Swan Hunter on the Tyne, were RMS Lusitania and RMS Mauretania. There can be no argument. The Lusitania was specifically built as an auxiliary cruiser to support the Royal Navy in wartime.

While she was being built, secret compartments were constructed to carry munitions. [4] and immediately war was declared the Lusitania was requisitioned as an Armed Merchant Cruiser, as indeed was the Mauretania. [5] Though it was denied in public and in parliament, the Lusitania doubled as an Admiralty transport ship carrying passengers as part of her cover when she crossed from America to Liverpool. Desperate to counter German claims that Lusitania was regularly transporting munitions across the Atlantic, the British government accepted that the ill-fated ship was carrying ‘a number of cases of cartridges and that ‘this ammunition was entered in the manifest’, on its last journey in May 1915. In other words, they were prepared to concede that ammunition was loaded on the Liner, but it was so insignificant that effectively there was nothing to hide. [6] The detailed manifest for the Lusitania’s final voyage as given by the company, and reported by the New York Times, confirmed that claim. [6] It was clearly fraudulent, all part of the screen of lies and half truths woven into official histories which have continued for a century. [7] 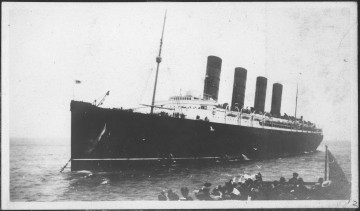 In May 1915 there was a serious Allied crisis in munitions, a crisis which JP Morgan and his associates in New York were being well paid to alleviate. Munitions had been ingloriously mismanaged by the War Office, by Lord Kitchener and by a British cabinet which was unfit to run a war. The scandal of munitions and the lack of high explosive shells were literally dynamite. On the western front, the duration and weight of the British bombardment was wholly insufficient to destroy the German defences or wipe out the front-line machine-guns because high explosive shells were not available. Furthermore, British artillery equipment and ammunition were in poor condition through over-use and faulty manufacture. The slaughter continued unabated. Every avenue had to be used to reduce the shell shortage.

In common with other Cunard liners, Lusitania regularly carried munitions, principally ordered from the Bethlehem Steel Corporation on every eastbound voyage. According to the telegram sent by the Cunard General Manager in New York to his counterpart in Liverpool, dated 29 June 1915, these were stowed in a trunkway on the lower deck beneath the bridge, just forward of the foremost bulkhead. [8] The somewhat crude inference here was that the Lusitania had little room for large volumes of munitions. It was a lie. Previous consignments carried by the Lusitania included filled shrapnel shells and fuses which consisted of the highly sensitive fulminate of mercury and were consigned to the Royal Arsenal at Woolwich. The former German Colonial Secretary, Dr Bernhard Dernburg, the Kaiser’s official spokesman in the United States, accused Cunard of using the Lusitania to carry 260,000 pounds of brass, 60 pounds of copper, 189 cases of military goods and 1,271 cases of ammunition. Brass, copper and military goods were officially classified as contraband of war. [9]

In 2012 the Lusitania’s 27 page supplementary manifest, which had never been previously mentioned in any document, report or newspaper, nor referred to at Lord Mersey’s later enquiry, was unearthed in the Franklin D Roosevelt Presidential Archives. It’s discovery was due entirely to the persistence and resilience of researcher Mitch Peeke, whose dogged determination to hunt down the document is detailed in a special guest blog. [10 ] Listed on page 2 of the supplementary manifest [11] are the 1250 cases of shrapnel – not cartridges – shrapnel sent from Bethlehem Steel to the Woolwich Arsenal, [12] together with 90 tons of lard destined for the Royal Navy Weapons Testing Establishment in Essex. Taking even the boxes of cartridges from Remington and Union Munitions Company alone, 4,200 cases weighing over 125 tons were consigned to the Royal Arsenal at Woolwich. In addition, large quantities of aluminium, nickel, copper, brass and rubber were stowed inside the cargo hold. So Bernhard Dernberg’s original claim to the New York Times in 1915 was, if anything, an underestimation.

One of the consignments of wool (Sheet 4, receipt 86) was destined for Erskine Childers, the man who had organised the pre-war gun-running for the Republican Irish Volunteers. [13] How strange. Childers had been called to the Admiralty Intelligence Department when the war broke out, and questions remain unanswered about which side he was truly on. How unlikely is it that this was some random import of wool? Could it have been highly volatile gun-cotton? Were there other imports destined for Admiralty personnel? Why too was the original copy of the Lusitania’s manifest hidden in the vaults of President F D Roosevelt’s archives? While we are unlikely to be able to answer this question, Mitch Peeke’s investigative work has destroyed the myth that the Lusitania was simply a Trans-Atlantic liner. It does raise further issues about how much the governments in Washington and London were complicit in the Lusitania’s abuse of its passenger-ship status. 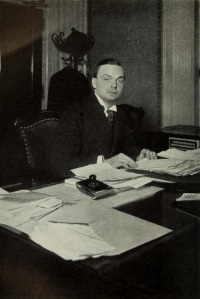 The New York Times reported a visit by the German Ambassador, Count Bernstorff to President Wilson in early June 1915 at which he quoted directly from Bethlehem Steel’s shipping records. These showed that the shipment carried by the Lusitania included 5,000 filled shrapnel shells weighing 103,828 lbs. This was completely at odds with the official custom’s records in New York. Dudley Field Malone, Collector of Customs for the Port of New York had been appointed in 1913 through the patronage of President Wilson whose election he had helped organise. Malone was a pliable lawyer; a political placement whom the President’s advisors used to their own advantage. He wrote to the manager of the Cunard operations in New York that ‘no description of cargo was loaded [in the Lusitania] in violation of American Shipping law, particularly as regards passenger steamers.’ It was a lie, but was presented as truth at the formal inquiry later in London. [14] Whatever the extent of the joint cover-up on both sides of the Atlantic, there can be no doubt that the Lusitania carried a large consignment of war materiel including gun-cotton. [15 ]

At Prime Minister Asquith’s Cabinet meeting on 11 May, the concern he felt about the fate of the Lusitania was not a warm-hearted reflection on the sad loss of life or pity for the victims, but a caustic analysis that betrayed his real priority. ‘The one thing to fear and avoid is that they [the Americans] should be provoked, in order to save their travelling millionaires from the risk of being torpedoed, to prohibit the export of munitions of war to us: which would be almost fatal.’ [16 ] So it was true. The travelling millionaires acted unwittingly as a screen behind which Britain was secretly importing munitions from America.  Dr Dernburg’s statement to the New York Times proves that Germans knew this as fact. Despite all of the denials, the mockery of a whitewashed enquiry, the indignant Cunard Company statements and the virulent anti-German propaganda that the sinking was a war crime, the wilful murder of unarmed civilians, [17] the British government knew that they had authorised the Lusitania to carry much needed munitions and other types of contraband of war from the eastern seaboard of America to the port of Liverpool. The munitions had been ordered by the War Office on behalf the Royal Arsenal. Kitchener, Lloyd George, Asquith and Churchill were all complicit in the act.