It is always an uphill fight to prise the truth from the establishment. Though we as a nation have rights and access to many files and historical documents, we do not have open access, nor are we to be given sight of documents still classified as secret after 100 years and more. [1] A group of genuine and dedicated history enthusiasts combined their efforts to unearth every ounce of source material on the sinking of the Lusitania, and the impressive result can be seen online at http://www.lusitania.net

Their painstaking work has included trawling through original materials at the Cunard Archives, the National Maritime Museum, the Imperial War Museum, Merseyside Maritime Museum, Royal Artillery Historical Trust, the Library of Congress, Museum of the City of New York, Kindle Museum, the BundesMilitararchiv, Cuxhaven U-Boat archive and most importantly, the Franklin Delano Roosevelt Presidential Archive. They have been assisted by Gregg Bemis, owner of the Lusitania wreck, and many other academics and engineers. They can proudly boast that nothing is included in the website that has not been verified by sight of documentary evidence.

Mitch Peeke, Steven Jones and Kevin Walsh-Johnson originally published their fascinating history The Lusitania Story, The Atrocity That Shocked The World in 2002, and an updated and extended (2015) centenary edition is now available. What follows is Mitch Peeke’s experience in trying to unearth evidence which we have been unable to access in Britain. It is an essay in tackling obstruction head-on, and as a result he and his colleagues have brought us closer to the truth about the Lusitania’s tragic sacrifice.

This is Mitch’s story, a tribute to dogged determination.

In writing first my biography of Lusitania’s Captain, then the Lusitania herself, I discovered that there are MANY myths, lies and half-truths attending the Lusitania Story. I was always intrigued as to why the Admiralty tried so hard to blame Captain Turner for the loss of his ship when she was lost purely to an act of war.

But my main struggle to find the truth stems from the fact that she was carrying American-made munitions as well as passengers, when she was sunk. As well as the fact that she was carrying three million .303 rifle bullets, I was particularly interested in a consignment of three-inch shrapnel shells, nearly 5,000 of them, shipped in 1,248 crates from the Bethlehem Steel Corp.

The cause of the ship’s sinking in a mere 18 minutes after being hit with just one torpedo has always been left as a “mystery”. This in my opinion, is deliberate. There are those out there who, to this very day, would prefer that the Lusitania keeps her secrets.

At the start of my quest, in 1999, I approached the Royal Naval Museum in Portsmouth, by telephone. I spoke to the Curator who initially seemed willing to answer my questions. That was until he guessed that it was the Lusitania I was talking about. As soon as the ship’s name came up, he changed tack and told me that he must “respectfully refer your enquiry to the Admiralty Records Office in London”. At which point, he hung up.

Undaunted, I contacted the Admiralty Records Office. However, they smelled the rat much more quickly, referred me to the Public Records Office in Kew and pulled the shutters down, pronto.

Now the Public Records Office have a huge collection of files, all of which one assumes would be diligently filed and cross-referenced. Ha! Semi-organised chaos is a better description of what I found there, particularly with such a controversial subject as munitions being shipped aboard transatlantic passenger liners! After an inordinate amount of time and patience had been exhausted, I gained little of any real value. What was valuable, was noting what I couldn’t get out of them! 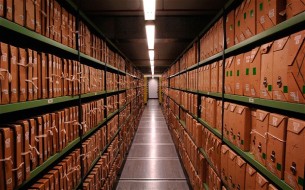 I couldn’t believe such a place could be so disorganised. Then it struck me. If you want to hide a stolen Christmas Tree, what better place to hide it than in a forest of Christmas trees! Such controversial matter is best hidden in a totally disorganised environment, where it becomes completely impossible to pin it down, yet to all intents and purposes, it remains public.

I needed to find a way around it and I did so by turning the problem on its head. Who was the recipient of those munitions; the end user? It was of course the Royal Artillery and they have their own museum in Woolwich.

The Curator there was extremely helpful, even putting me in touch with the Royal Artillery Historical Trust. Within two weeks I knew how the shipments were packed, who usually supplied them, how they were handled and how each shell was constructed.

It is quite true of Government Agencies that the right hand remains unaware of what the left hand does. Nobody from the Admiralty had told the Army NOT to talk about such things! I got what I wanted in writing!

Next Port of Call was the Imperial War Museum in London. Their Maritime Curator was an expert in ship construction as well as WW1 munitions. By the time I’d finished there, I had a THEORY as to why the ship had gone down so quickly, but it was only a working theory.

The Cunard Archives in Liverpool are similarly organised as those of the Public Records Office, but quite by chance, my research partner had found a cargo stowage plan on one of his visits. The staff refused to let him photocopy it, which aroused his interest so he sent the librarian off on another document hunt whilst he sketched it on plain paper. The original document has since “gone missing during a move” apparently.

I now knew what she was carrying and where in the hold it was stored. From the BundesMilitarArchiv in Germany, I’d obtained a copy of the U Boat’s war diary entry for the attack and I did get some of the more trustworthy statements of the Lusitania’s crew members from the Public Records Office. What I sorely needed was a certified copy of the ship’s cargo manifest.

We went to press in 2002 with not much more than our working theory, backed up by expert opinion from the museum curators I’d spoken to, but the theory made sense and the book was a success. But I knew that manifest existed SOMEWHERE and I wanted it!

Having exhausted all UK sources, I turned to America. I had a computer of my own by then and had mastered the internet and email! I found America a far more accessible place! Nobody pulled the shutters down. In fact, they went the extra mile for me. Having gone through US Customs Archives, The Museum of the City of New York to NARA, The Library of Congress and the New York Times Archives, I was finally rewarded with a suggestion that I try the personal archive of President Franklin D Roosevelt.

When I asked why, I was told that FDR was a man who’d actually wanted to know what skeletons were in the US closet. In 1940, he’d demanded the full copy of the Lusitania’s manifest. He got it. Having read it, he kept it under lock and key.

Having spoken to the staff at the FDR Archives and explained my quest for this particular Holy Grail, I was permitted to pay for the manifest to be digitally photographed, page by page, plus the memo to FDR from the then Collector of Customs in New York. After a little more negotiation, I was given the necessary permission to make my copy public, via our website, in 2012. All this, whilst still holding down a full-time job, changing my career mid-term and being a father! With determination, the truth will out!

Our website has grown immensely since it opened as one page in 1999. It is now used by students the world over, as is our book THE LUSITANIA STORY. The book has been updated with all our new findings and more pictures, in time for the centenary of the disaster.

We unreservedly recommend this book to our readers.  [Gerry and Jim]

5 thoughts on “Guest Blog. Mitch Peeke; The Lusitania Story – A Struggle For The Truth”