In the first six months of the war the German submarine fleet was mainly used on reconnaissance missions and attacks on warships; in total, the U-boat fleet sank only ten British merchant ships. The first was the steamer Glitra on 20 October 1914 off the Norwegian coast. Having been ordered to heave-to, the ship’s company was given time to lower their life-boats and no lives were lost. [1] According to the recognised practice of international law, a submarine commander had to ascertain the identity of the target and make adequate provisions for the safety of crew and passengers before attacking an enemy merchant or passenger ship. Since it was impossible for the cramped submarines to take on board the the numbers present on large ships, the best they could do was stop the ship and give passengers and crew a chance to take to the lifeboats. [3] This was initially common practice. By early 1915 British merchant shipping still operated on a virtual peacetime basis without any reliance on a convoy system. Admiralty  Intelligence assessed that the German Imperial Fleet had no more than 25 submarines capable of blockading the British Isles, and since these could only operate in three reliefs, no more than eight were likely to be active simultaneously. [2]

Although international law was generally recognised by U-boat captains in the first months of the war, changes in British anti-submarine tactics led them to re-asses the risks they faced when surfacing near merchant vessels to give the crew the opportunity to abandon ship. At the outbreak of war, thirty-nine large British merchantmen had been fitted with 4.7-inch deck guns and increasingly more were armed with such weapons. Whereas ships could generally afford to survive several hits, a submarine which had surfaced was very vulnerable to attack and a single hit might make it impossible for her to dive. As First Lord of the Admiralty, Winston Churchill took an aggressive stance against submarine warfare by ordering merchant ships to attempt to ram U-boats on the surface.

In addition, the introduction of armed decoy tramp steamers (later named Q ships) greatly increased the risk to submarines operating from a surface position. With guns carefully concealed as deck-structure, the decoy would suddenly drop the disguised or camouflaged boards which concealed their weapons and then open fire.  This tactic was immediately successful but caused U-boat captains to rethink their strategy. The rules of engagement had been torn up and U-boats remained submerged for their own safety. There would be no warning. The first and only indication a merchant crew might get was a fast, steady stream of tell-tale bubbles heading towards them. Submarine warfare entered a new phase of silent approach and unheralded torpedo attack. In the bitterness of war the struggle for command of the seas brought ever increasing danger to maritime traffic.

On 1 February 1915 the German Chancellor approved a submarine campaign against sea-borne commerce in retaliation for the British blockade of Germany and the illegal tactics used by British merchant ships flying false ‘neutral’ flags. [4] The objective, to cut Britain’s sea communications and starve her into submission, was totally unrealistic given the paucity of U-boats and the volume of international trade. 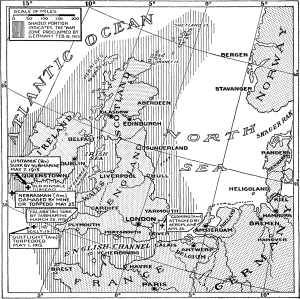 Three days later the Kaiser approved the action and proclaimed a designated war zone around the coast of Britain and out into the Atlantic. Germany claimed the right to dispense with the customary preliminaries of visit and search before taking action against merchant vessels. They warned that belligerent merchantmen were to be sunk and it was no longer possible to avoid the danger to crews and passengers. Neutral shipping was advised to stay out of the zone from 18 February onwards or face similar consequences. There was an immediate outcry. The Times portrayed the German tactic as a war on neutrals and dismissed the Kaiser’s proclamation as a ‘new piracy’. [5]

Initially the American press dismissed the declaration as ‘bluff’. The Philadelphia Ledger dismissed it as  an ‘intimidation calculated to raise insurance rates and instil fear in shipping circles’ [6] On the other hand, international lawyer Frederic Coudert fumed that it was an ‘absolutely unprecedented stroke of barbarism’ that was ‘not in any way justified by law or morality’. In reality, analysis of the German War Zone decree showed it to be very similar to the earlier British ‘blockade’ on Germany, and government officials in the American State Department realised that the Germans  had executed a clever counter diplomatic stroke. [7] Winston Churchill remained adamant that, ‘no appreciable effect would in fact be produced upon our trade, provided always that our ships continued boldly to put to sea. On the other hand, we were sure that the German declaration and the inevitable accidents to neutrals arising out of it would offend and perhaps embroil the United States.’ [8]

Despite the initial hysteria, the German blockade of the British Isles began as promised on 18 February. That same day a British merchant ship was torpedoed in the Channel and by the end of the first week, eleven British ships had been attacked, of which seven were sunk. But put this into perspective. In the same period no less than 1,381 merchant vessels had safely arrived in, or sailed from, British ports. Trade continued unabated. In April 1915, only twenty-three ships were sunk out of over six thousand arrivals and departures. Six of these were neutrals. At least four U-boats were destroyed in the same period. [9] This was not Armageddon.

Given that the total number of U-boats operating around British shores at any given time was strictly limited, the secret codebreakers in Room 40 had, by February 1915, the capacity to track their wireless messages and follow their general direction as they moved from area to area. Though not yet an exact science, the information was priceless. On 15 February 1915, three days before the German War Zone around Britain took effect, Churchill wrote a top secret memo to the President of the Board of Trade, Walter Runciman,  outlining an opportunity which the German tactic presented. It was the kernel of an idea which appealed to both him and the inner-core agents of the Secret Elite;

‘It is of the utmost importance to attract neutral shipping to our shores, in the hope of especially embroiling the U.S. with Germany. The German formal announcement of indiscriminate submarining has been made to the United States to produce a deterrent effect on traffic. For our part, we want the traffic — the more the better; and if some of it gets into trouble, better still’ [10]

While the Mediterranean fleet headed towards the Dardanelles, where within four days they would begin a bombardment of the Turkish forts, the Secret Elite in London were plotting to use the German submarine campaign to provide their American counterparts with a reason to entice the United States into the war. Since so very few people knew about its existence inside the Admiralty, Room 40 became a secret weapon on its own with Churchill, a key Secret Elite operative, as its master and commander.

He did not supervise the day to day operations, that was the duty of Captain ‘Blinker Hall’, but all were answerable to him. Arguments have been constructed around the climate of absolute secrecy inside the Admiralty which insist that Churchill did not know all the circumstances surrounding the Lusitania’s voyage. What nonsense. He was obsessed by control; obsessed by his own image; obsessed by the public perception that he was the Admiralty. Of course he knew.

Consider the knowledge and information available to Churchill. In Room 40 the cryptographers knew precisely which U-boats were at sea and actively hunting down merchant shipping. They could follow radio messages from area to area and plot their location. The Admiralty Intelligence Division knew how the German submarines operated and the conditions they required for a successful hit. They were aware of almost every German vessel’s position. The Admiralty Trade Division knew which merchant ships and passenger liners were approaching British waters and which were scheduled to leave. No-one had instant access to these departments, save Churchill, the First Sea Lord, Jackie Fisher and  Admiral Henry Oliver, Chief of Admiralty War Staff.

To have such detailed information to hand put Churchill in a position few leaders have ever enjoyed. He had quickly determined that the information could be used to ‘embroil the U.S. with Germany’. How had he expressed it to Runciman? The greater the traffic, the greater the opportunity for German U-Boats to sink a neutral ship, and ‘better still’ if some American traffic got ‘into trouble’. This wasn’t a chance remark. It was a statement of intent.

And through Churchill’s department, the Secret Elite intended to engineer a crisis that would swing public opinion in the United States towards war. The plan which took shape was not discussed in Cabinet, nor recorded in official papers, but Churchill’s letter demonstrated clearly that the idea of an American ship getting ‘into trouble’ was  considered secretly at the highest level. We will provide evidence that the impact of a U-Boat torpedoing a Trans-Atlantic Liner carrying American passengers was not only  discussed with the Prime Minister, Foreign Secretary, Sir Edward Grey and even the King, but the means of enabling such a traumatic incident had been agreed. The Secret Elite intended to facilitate an international incident to Britain’s advantage using  German submarines to their own end. Had it not been the Lusitania, another such ship would have served the same purpose, but the Lusitania was the perfect target. She regularly transported the richest of Americans across the Atlantic. The endangering of a hundred migrants or working class souls has long been of less concern that an international millionaire banker or icon from high society. If only they could isolate a target, channel it towards a prowling U-boat and leave the rest to the fates …

1 thought on “Lusitania 3: A Statement Of Intent”