By 1915 Belgian citizens felt that their voice was better represented by the Comite National de Secours et Alimentation (CNSA) than the King or the Government-in-Exile. They referred to it as ‘le government provisoire’, the temporary or provisional government. [1] Created in September 1914, the CNSA liaised directly with the German authorities in Belgium. It had been constituted in Brussels under the chairmanship of Ernest Solvay, and the patronage of the Head of the American Legation, Brand Whitlock and the Spanish minister, the Marquis de Villalobar. In addition, Herbert Hoover’s disciple, and key member of the Commission for Relief in Belgium (CRB), Hugh Gibson, was present in his capacity as First Secretary of the U.S. Legation. [2] They formed an elite cabal of influence, so immensely powerful that it failed to save Edith Cavell. Strange indeed, though these men went to great lengths to present a story which gave birth to the myth that the CRB and CNSA did everything that could possibly be done to stop her execution.

In his later account, Hugh Gibson made much of his remonstrations with Baron von der Lancken on the eve of Edith Cavell’s execution, but Gibson, first and foremost a Hoover man, was merely going through the motions. The focus of Gibson’s ‘evidence’ centres on himself, Brand Whitlock, the Marquis of Villalobar and the Belgian lawyer, Maitre Gaston de Leval, but he knew that the most important and influential person in Belgium was Emile Francqui, the President of the executive committee of the CNSA. Francqui resented Hoover’s interference in Belgian affairs on a personal level, but if any individual could have taken effective steps at the last minute to save Edith Cavell, it was him. He did not lift a finger to help her. Why? You might well ask, did Edith Cavell’s death suit the needs of the Commission for Relief in Belgium and the CNSA? Had she had been identified as the source of critical articles in the British press? Was there detailed information about the German abuses of Belgian Relief inside the parcel which had been ripped open and examined before it reached the editor of the Nursing Mirror? [3] We should remember that Hoover had demanded that such leaks must stop.

What too of the inventive Maitre Gaston de Leval, wrongly described by the New York Times as ‘legal advisor to Edith Cavell’? [4] That very claim inferred that Edith had been given legal council, but she was never properly represented by those charged with her safety and did not speak with Leval at any point. He was a company man and played a major part in concocting the impression that Brand Whitlock and his American associates had tried every avenue to save her from the firing squad. Leval was invited to address a meeting of the Secret Elite’s inner sanctum in New York, the Pilgrims of America, on 26 January 1916 at which Lord Bryce, author of the Bryce Report on German Atrocities in Belgium, was present. [5] Co-incidence? What fate brought together the author of the greatest single piece of anti-German propaganda and lies in the opening years of the war, and the man who claimed to represent Edith Cavell and whose false testament appeared to clear the Americans of any charge of complicity?

Feted in the United States, Gaston de Leval’s story grew in the telling and he repeated his accusations against Edith’s real lawyer, Sadi Kirschen. He claimed that Kirschen had deliberately kept him in the dark and had been mysteriously unavailable on the night that Edith was sentenced. True, Sadi Kirschen had left Brussels for the weekend having been assured that nothing would happen to the prisoners. As he grew bolder, De Leval’s allegations became increasingly malicious. His nefarious slanders were circulated in the press. He alleged that Thomas Braun had asked to be replaced as Edith Cavell’s lawyer and Kirschen was depicted as an Austrian and a spy. De Level claimed that Edith had been abandoned in her hour of need and handed over to an enemy lawyer. [6] 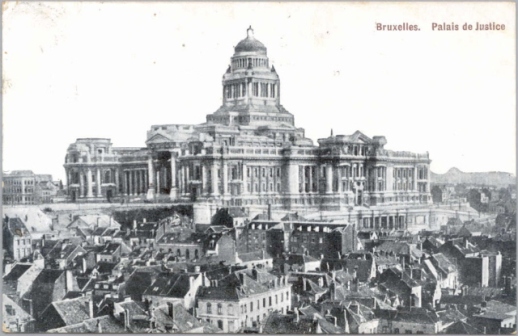 Sadi Kirschen’s reputation lay in tatters, and he literally took the matter into his own hands, confronted Leval in the Palais de Justice in Brussels on Christmas Eve 1918 and knocked him to the ground. Kirschen accused Leval of slander and in the resulting court case, the Brussels Bar Council adjudged that Leval had made no attempt to meet Kirschen between 8 – 11 October 1915. In other words it was Leval who had lied. He was guilty of slander. No matter; he had served the Americans well. He was a man without honour whose courtship with fame knew no bounds. Gaston de Level presented himself as one of the chief mourners at Edith’s later internment in England. He joined the official family group following her coffin into Westminster Abbey on 15 May, 1919. [7] He had never met, nor spoken to, nor represented her in court, but lived the lie that he had tried everything to save Edith. Despicable.

There was one further incident that is generally ignored by historians. When the Foreign Office decided to publicise the letters and reports from Leval and Brand Whitlock in The Times, the German authorities, and Baron von der Lancken in particular, were appalled. He summoned Whitlock to his office on Monday 25 October 1915, and demanded that the head of the American Legation retract his lies and make a formal apology. He was particularly enraged by Gaston de Leval’s so-called ‘report’, which as we have demonstrated, was laced with lies. Von der Lancken threatened to have the Belgian lawyer sent to a concentration camp in Germany. [8] He was visibly incensed by the totally inaccurate version released by Hugh Gibson and Whitlock and pointed to the lies contained in the reports. He told Brand Whitlock to his face that he, as Head of the American Legation had NOT made frequent enquires about Edith Cavell’s condition and representation, [9] and he insisted that the American Legation had never asked to be kept informed about the legal process. [10] Von der Lancken demanded that an immediate retraction be written. Notices were published in the streets of Brussels denying that Whitlock was kept ignorant that the death sentence had been pronounced, or that the German Authorities, by proceeding rapidly, had prevented him from intervening in favour of the accused. [11] Thus, the official version, published and approved by the Foreign Office, was lambasted as utterly false. Brand Whitlock never changed his story, but received permission from Washington to issue Gaston de Leval with an American passport to get him urgently out of Belgium. After all, they could hardly have allowed him to be interrogated by the secret police.

The fallout did not stop with de Leval’s expulsion. Hugh Gibson was not forgiven by the Germans for his jaundiced report of Edith Cavell’s trial. He became persona non grata. [12] Though he lingered at the Brussels’s legation, antagonism to him steadily grew until on 7 February, 1916 Von der Lanken arrived at Brand Whitlock’s door and demanded that Gibson leave ‘today or at the latest, tomorrow’. [13] The reason noted by Whitlock was quite specific. ‘His [Gibson’s] firm stand in the Edith Cavell affair, and his statements upon it afterwards, had now resulted in a crisis. It was felt desirable to give him leave of absence.’ [14] It says much that Whitlock made no serious protest about the loss of his secretary. In this intricate web of complicity, Hugh Gibson, a young man-on-the-make of the type with whom Hoover surrounded himself, who had proved his loyalty to the CRB, found himself promoted to the American Embassy in London. Hoover arranged the prestigious appointment personally through Ambassador Page. [15]

And what of the British Government? In this amazing litany of Pontius Pilots, all lining up to distance themselves from the execution, the Foreign Office also played its part. It firstly claimed that it was powerless to intervene, but confidently trusted that the American Legation in Brussels would see that Edith had a fair trial. Sir Horace Rowland at the Foreign Office ‘was afraid that it was likely to go hard with Miss Cavell’. In documents that only saw the light of day in 2005, Lord Robert Cecil, Under-Secretary of State at the Foreign Office, wrote in words that paraphrased de Levall’s excuse, that ‘any representation by us will do her more harm than good.’ [16] In other words, they did nothing. However, after Edith had been executed, the Foreign Office took the unprecedented step of publishing all of the reports and letters received from the American Legation in Brussels. It used Reuters to guarantee a world wide audience. The daily editorial and an entire page [17] inside the Times was given over to Brand Whitlock’s false account. He, Gibson and de Leval were duly praised for their ‘chivalrous zeal’ in trying to save ‘our countrywoman’s life’. [18]  What shameless hypocrisy.

Once dead, Edith Cavell presented the British propaganda machine with the perfect cause celebre; the patriot-saint, a matron dressed in martyr’s robes, transformed in death into a rallying call against the evil Hun. In the House of Lords, the public mood was caught by Lord Desart (from the Committee of Imperial Defence) in an outraged condemnation. ‘She was tried in cold blood; she was convicted in cold blood; she was executed in cold blood.’ Lord Lansdowne assured everyone ‘that the representatives of the United States and of Spain at Brussels up to the very last moment neglected no opportunity or effort in order to obtain a commutation of the death sentence passed on Miss Cavell, or even to obtain at least a period of suspense before that sentence was carried into effect.’ [19]

It was such a cleverly worded absolution which inferred that the American and Spanish representatives had done everything they possibly could for Edith. We know now that they had moved so painfully slowly that any chance of assistance came too late. Edith’s links with the de Croys, and her letters to the Nursing Mirror were carefully airbrushed from history and replaced with ridiculous stories and downright lies. [20] Most importantly, they deflected criticism from the CRB. Indeed, they removed the Commission’s name from any association with Edith’s death. Propaganda posters spawned myths, but their value for recruitment, for justification of war, and for the agitation of the American public was priceless.

For a century these sad lies have been allowed to persist promoted by establishment historians. They are regurgitated now despite the fact that contemporary research has unmasked the fraudulent claims and deliberate obfuscations. We share the concerns of those who have asked what was the real purpose behind Edith Cavell’s ‘martyrdom’? Our next blog will deal with some answers.