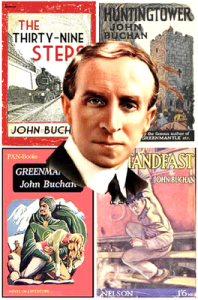 Buchan’s fiction-writing about a world of spies and counter-intelligence was a reflection of his real-life experience, as was the South African background he gave to many of his heroes. It was based in fact laced with nostalgia and propaganda. There is no doubt that both directly and indirectly he was intent on winning the propaganda battle in the war against Germany, both at home and in America. He was after all Director of Information. Buchan had been approached by Charles Masterman, who was married to his wife’s cousin, to be part of the massive propaganda assault on Germany. It was a task he relished from his sick-bed in 1914 to his numerous post war publications. His world of fiction was sucked into the vortex of justification for Britain’s declaration of war and John Buchan’s eponymous creation, Richard Hannay, [1] became the ultimate hero of First World War espionage and counter-espionage. Hannay, as his invention, was the man Buchan wished he had been: a gentleman, the outdoor – type, at home in the Veldt and on the Scottish moors; honourable, an Empire loyalist and fighting soldier, who survived Loos, though wounded, and the hell that was the Somme. Richard Hannay was the boy’s own hero that Buchan never was. Oddly enough, though he never fired a rifle or fought in the trenches, Buchan ended the war with the rank of Colonel [2] while Hannay made it to Brigadier. [3]

Richard Hannay was, from the opening sentence of The Thirty-Nine Steps, ‘pretty well disgusted with life’ and had ‘got his pile’, as a mining engineer in South Africa. Looking for an adventure Hannay became engaged in a world of spies, of the looming danger of war in Europe and of German plots to destroy the British fleet. Buchan penned the ‘shocker’, as this short novel was them termed, while confined to bed in 1914. It was published in Blackwood’s Magazine in instalments between August and September 1915, and in book form in October. How many of us who read the gripping tale before we reached our teens realised that it was written as part of a propaganda campaign? And because of that, what influence did it have on our understanding of the causes of war? It is important to consider that question seriously. In 2014, The Thirty-Nine Steps was voted number thirty-two in the Guardian newspaper’s top one hundred novels written in the English language. [4] It is still read in innocence.

From within the text of a boys-own adventure, Buchan gave his hero knowledge of the coming war and occasionally betrayed information that had been openly denied in Parliament. Hannay, ‘just happens’ to meet a French Staff Officer on a boat coming back from West Africa who assured him that despite ‘all the nonsense talked in Parliament, there was a real working knowledge between France and Britain, and that the two General Staffs met every now and then, and made plans for joint action in case of war’. [5] By 1915, Buchan could dismiss the lies to Parliament about secret alliances which had been repeated by both prime minister Asquith and foreign secretary Sir Edward Grey from 1906-1914, with implied approval and acknowledged good sense. It was a subtle and clever move which presumed that by 1915, the reader would appreciate the value of senior elected politicians’ hoodwinking parliament. 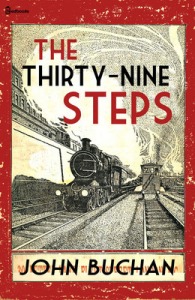 A second theme which began in The Thirty-Nine Steps was that the old Liberal political thinking was ‘the most appealing rot’. When Liberals dismissed the “German Menace” and saw it as a Tory invention to cheat the poor and restrain the great flood of social reform, Buchan’s hero shook his head sadly. With that glorious strain of upper-middle-class superiority, Hannay dismissed the appeal for peace and reform with the patronising aside that ‘you could see the niceness of the chap shining out behind the muck he had been spoon-fed.’ [6] Later, the same Liberal character is described as ‘as good a chap as ever breathed, but his idiot of an uncle has stuffed his head with maggots’. [7] The propagandist view was that the well-intentioned, but fundamentally flawed pacifist and anti-war movement, was for the weak-minded. It was all part of the high-powered justification of the war. Consequently, a century later the unsuspecting reader receives biased views on the causes of the war expressed as truth, though the facts have been roundly criticised in the light of historic evidence, and does not realise that she or he is one more victim of propaganda.

His Richard Hannay novels offer a unique insight into the minds of the Secret Elite and their friends as the war progressed. In Greenmantle, (published 1917) enclosed within the dust-jacket of what was taken as fiction, he revealed the Foreign Office fixation with the Ottomans, the vast array of spies and business links that fed information to London and expounded the trusted views of the British Establishment. Thus the complex machinations behind British policy towards Turkey at the start of the war, where two dreadnoughts, built in Britain for the Turkish navy were commandeered, and the German battlecruiser Goeben, and light battlecruiser, Breslau, were literally shepherded into the Bosphorus to protect Constantinople from the Russians, is presented as how Turkey ‘had left the rails’; [8] not as part of an analysis on why Turkey had allied itself to Germany. The Young Turk leader, Enver, is described as a ‘Polish adventurer’, and his colleagues as ‘a collection of Jews and gypsies’ who took control of a ‘proud race’ by dint of German money and Germany arms. Racial and religious prejudice is excused today as ‘how it was’ without a blush of apology. 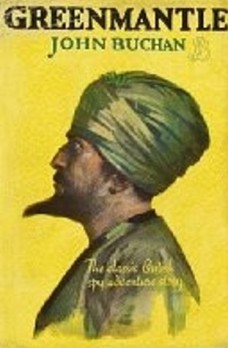 The over-riding theme was that a Jehad was in the offing and the wicked Germans were orchestrating evil. ‘Islam is a fighting creed, and the mullah still stands in the pulpit with the Koran in one hand and a drawn sword in the other’. [9] Sadly Buchan would find many of his countrymen nodding in agreement at such stereotyping a century later. And what would be endangered was the British Empire; India, in particular. Readers were assured that ‘Germany’s like a scorpion: her sting’s in her tail and that tail stretches way down into Asia’. [10] In Mr Standfast, (published 1919) the real enemy is a German super-spy who is trying to influence the world toward a peace settlement which will end the war before Germany is crushed. But Buchan used the novel to attack anyone and everyone who stood against the war or argued for an end to the conflict. One older man was described as being ‘the sort who, if he had been under fifty, would have crawled on his belly to his tribunal to get exempted’. [11] When asked to play the role of a pacifist, Hannay ‘looked forward to it with naked shame’. Criticism of generals like Buchan’s friend from Oxford, Field Marshall Douglas Haig, was ‘idiotic’ and the critic was dismissed was an ‘honest crank’ who had somehow ‘lost his self respect.’ [12] This was the world of the ‘half-baked, the people whom this war hasn’t touched or has touched in the wrong way’. [13] And we read it as truth.

Like Milner, Buchan had an intrinsic faith in the soundness of the British working man whom he considered decent, loyal and sensible. He  made no detailed reference to the expendable nature of troops sacrificed by his employers at Loos or the Somme. The carnage and true horror of war was softened into warm words and platitudes which brooked no criticism of the military elite. This fondness for the stout hearted Tommy found expression both in his novels and in his historical works where he repeatedly stated that the war was won by the rank and file. [14] While he had no time for the philosophy of pacifism, and especially for the notion that the war should be brought to a peaceful end, Buchan expressed sympathy for certain individual pacifists who died in the fighting.

In Mr Standfast, the misguided Fabian, Launcelot Wake, finds redemption, [15] in Buchan’s eyes, by serving at the front as a non-combatant conscientious objector whose ‘only weapons … were his brains’. [16] Wake never fired a shot, but was invaluable in carrying vital messages between endangered wings of an assault. Even so, most of Buchan’s fictional heroes came from the ranks of privilege; from Eton, Oxford and the London clubs from where his lasting friendships emanated.

Was any other figure so magnificently placed to be a true and loyal servant of the Secret Elite? He literally chose who and what to include in his histories thus guaranteeing that the powers behind the decision-makers in government remained unnamed.

Professor Carroll Quigley explicitly placed John Buchan in the outer circle of Society of the Elect, the group whom we have expanded into the Secret Elite. [17] Like every other major contributor to the legacy of Rhodes and Milner, John Buchan received his due reward. As we demonstrated in our previous blog, after a relatively undistinguished political career as a Tory MP in the post-war period, Buchan was elevated to the peerage and appointed by a grateful monarch to be the Governor General of Canada in 1935. His qualification for the highly prestigious post as the King’s representative in the great Dominion was his service to the Empire’s cause. He was the right sort. He belonged to the secret cabal that held absolute power in the foreign office and the colonial office. His was a safe pair of hands.

But what of his propaganda? His prodigious histories of the war [18] are now largely ignored, and the suggestion that the concentration camps in South Africa were turned into health resorts, [19] conveniently forgotten. This has always been the establishment’s way of burying the truth; ignore it, even when it is a despicable lie. But his novels? They are still reprinted regularly in the twenty-first century, still promoted as adventure stories for, though not exclusively for, the younger reader. Richard Hannay in particular is the star of at least three films and an exceptionally funny stage play. At no point do the publishers or producers give warning that the content originated in war-time propaganda. But the notion that Germany caused the war, that ‘right-minded’ British and overseas soldiers fought for ‘civilisation’, that those who sought peace were somehow disloyal and weak-minded, pervades the novels, as secure in its rigid certainty as the Highland moors over which Buchan’s hero trod.

It’s time to come clean. This work is grounded in propaganda.  A century on, should our children not be made aware of the primary purpose of these novels?