The November 1917 Balfour Declaration was the final product of many interested parties with whom the Secret Elite was intimately involved. For over a century historians and journalists have focussed attention on the final outcome, the Balfour Declaration itself, but the process through which that brief letter of support was constructed clearly demonstrated the collusion of governments and lobbyists which spells out a conspiracy which has been ignored or airbrushed from the received history of the time. Take for example the role of Alfred Lord Milner, the central influence inside the Secret Elite and unelected member of Lloyd George’s War Cabinet.  At a previous Cabinet meeting on 4 October 1917, participants had considered a draft declaration written by Milner himself and influenced by his Round Table acolytes. 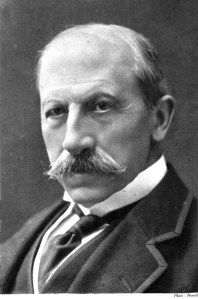 His draft specifically supported the view that the government should ‘favour the establishment of a National Home for the Jewish Race’. [1] The capitalisation of the term National Home was later altered, as was the very Milnerite phrase, ‘Jewish Race’. Lord Milner was a very precise thinker. While the words National Home implied that the Jewish people throughout the world should have a defined area to call their own, his version favoured ‘the establishment’ of such a place. It did not imply a return to a land over which they had assumed rights. Secondly, Alfred Milner held Race in great esteem. He defined himself with pride as a British ‘Race Patriot’. [2] His wording was a mark of respect. Others feared that it was a dangerous phrase which might be interpreted aggressively. It clashed with the concept of Jewish assimilation, like Jewish – Americans, and hinted that as a faith group, Jews belonged to a specific race of peoples. Consequently, his version was toned down.

Secretly, the War Cabinet decided to seek the opinion on the final wording of the declaration from both representative Zionists (their phrase) and those of the Jewish faith opposed to the idea of a national homeland. It is crucial to clearly understand that inside the international Jewish community there was a considerable difference of opinion in favour of, and against this idea of a Jewish ‘homeland’. That these groups were apparently given equal standing suggested that the Jewish community in Britain was equally split on the issue. They were not. The number of active Zionists was relatively small, but very influential.

Furthermore, the War Cabinet sought the American President’s opinion on the proposed Jewish homeland in Palestine. [3] The minutes of the 245th meeting of the War Cabinet in London revealed that Woodrow Wilson was directly involved in the final draft of the Declaration. So too was his minder, Colonel Edward Mandell House [4] and America’s only Jewish Chief Justice, Louis Brandeis, [5]  both of whom telegrammed different views to the British government. [6] On 10 September, Mandell House indicated that the President advised caution before proceeding with a statement on a future Jewish homeland; on 27 September, Judge Brandeis cabled that the President was in entire sympathy with the declaration. Much can change in politics inside two and a half weeks.

As each layer of the onion is slowly peeled away from the hidden inner core of the eponymous Declaration, it becomes apparent that the given story has glossed over key figures and critical issues. There are hidden depths to this episode that mainstream historians have kept from public view and participants have deliberately misrepresented or omitted from their memoirs. 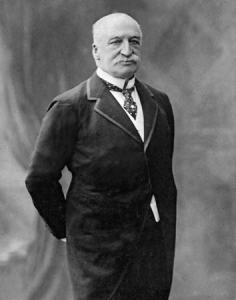 The previous minutes of the War Cabinet Committee held on 3 September 1917, showed that the earlier meeting had also been crammed with Secret Elite members and associates including Leo Amery, formerly Milner’s acolyte in South Africa. [7] Item two on the agenda revealed that ‘considerable correspondence… has been passed between the Secretary of State for Foreign Affairs (A.J. Balfour) and Lord Walter Rothschild … on the question of the policy to be adopted towards the Zionist movement.’ [8] What? ‘Considerable correspondence’ had been exchanged between Lord Rothschild and the Foreign Office; not a letter or enquiry, but considerable correspondence. A copy of one of these letters sent from the Rothschild mansion at 148 Piccadilly on 18 July 1917 has survived in the War Cabinet minutes. What it reveals shatters the illusion that the British government’s promise of support for a Jewish national home in Palestine stemmed exclusively from the foreign office under the pen of Arthur Balfour. Lord Rothschild’s letter began:

‘Dear Mr. Balfour,
At last I am able to send you the formula you asked me for. If his Majesty’s Government will send me a message on the lines of this formula, if they and you approve of it, I will hand it on to Zionist Federations and also announce it at a meeting called for that purpose…’ [9]

He enclosed his (Rothchild’s) recommendation for a draft declaration. It comprised two sentences: (1) His Majesty’s Government accepts the principle that Palestine should be reconstituted as the National Home of the Jewish people. (2) His Majesty’s Government will use its best endeavours to secure the achievement of this object and will discuss the necessary methods and means with the Zionist Organisations.’ [10]

Balfour’s reply ‘accepted the principle that Palestine should be reconstituted…and [we] will be ready to consider any suggestions on the subject which the Zionist Organisation may desire to lay before them.’ What? How do you ‘reconstitute’ a country? It might be interesting to consider the precedent that was being set. Could this mean that one day America might be reconstituted as a series of native Indian reserves or parts of England as Viking territory? Astonishingly, the Zionist movement was invited to dictate its designs for British foreign policy in Palestine. [11] This was not some form of loose involvement. It was complicity. Lloyd George’s government, through the war cabinet, colluded with the Zionist Federation to concoct a statement of intent that met their (Zionist) approval. Furthermore, it was agreed that such an important issue, namely the future of Palestine, should be discussed with Britain’s allies, and ‘more particularly with the United States’. [12] This action had all the hallmarks of an international conspiracy. 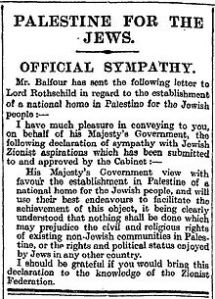 How many lies have been woven around the design and origins of the Balfour Declaration? Lord Walter Rothschild was the chief intermediary between the British government and the Zionist Federation. In this capacity he had been involved in the process of creating and formulating a new and explosive British commitment to the foundation of a Jewish home in Palestine. More than that, Rothschild and his associates sought to control ‘the methods and means’ by which it would be created. This mindset never wavered in the years that followed.

What influences had been activated to bring Lloyd George, in conjunction with Woodrow Wilson, to such a position by November 1917? Behind the scenes, who was pulling the strings? Who were these Zionists, and why were they given such immense support from the Secret Elite and, in particular, their British political agents? How could a minority group, suddenly command such power on both sides of the Atlantic? An exceedingly small minority group of no previous political or religious influence, whose ideology had been dismissed by many leading Rabbis as contrary to true Jewish belief, emerged as if from nowhere to strut the world stage. This did not happen by chance.

It happened by design. This we will demonstrate over the next few blogs.