Words like hunger and starvation found no place in the vocabulary of the British press when Lloyd George decided to cut and run for re-election in December 1918. The supreme political predator wasted no time in calling a general election to offer the British people a ‘democratic’ choice between his coalition partners who had latterly run the war, and either the rump of the old Liberals led by Herbert Asquith or the emerging Labour Party under Ramsay MacDonald. After all he was the man who had won the war, was he not? Lloyd George was determined to pre-empt his loss of personal power which would inevitably be threatened by the social and economic problems attendant on demobilisation and the difficult reversion of British industry from war to peace. There was also the possibility of very awkward questions being asked about the war’s causes, prolongation and mismanagement. True to Lloyd George, this was an act of political immorality totally devoid of justice. His prime interest was himself. 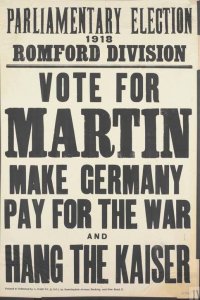 Very few in Britain knew the true origins of the war or of Germany’s innocence, and bitterness towards the Germans knew no bounds. George Barnes, the Labour member of the War Cabinet shouted from a political platform, ‘I am for hanging the Kaiser’. [1] Conservative Sir Eric Geddes promised to squeeze Germany ‘until you can hear the pips squeak’. [2] The Secret Elite had always demanded that Germany be crushed. That, after all, was the raison d’etre of the war. The three week election campaign fuelled by greed, prejudice and deception ended with the prime minister declaring Britain’s absolute right to an indemnity which covered the whole cost of the war. His supporters claimed that a vote for a Coalition candidate meant the crucifixion of the new Antichrist [3] (the Kaiser’s Germany) at the ultimate behest of the real Antichrist … the Secret Elite. Do not underestimate their capacity to ensure their priorities held sway.

The General election was held on Saturday 14 December 1918 and resulted in a landslide victory for the coalition of David Lloyd George’s Liberal supporters and the Conservatives who propped up his government. There were others whose election victory in 1918 had not been anticipated by the Secret Elite. The Labour Party emerged with 57 MPs, and in Ireland, the traditional Irish Parliamentary Party was virtually wiped out by the Sinn Féin Republicans.

Ironically, Sinn Féin had no connection with the Easter Rising in Dublin in 1916, but the consequent executions, murders and imprisonment of Republican Irishmen changed the political landscape. In treating Ireland with contempt, linking the long promised Home Rule Act to conscription to the British Army, and repeatedly delaying the political change which the vast majority in the south of Ireland sought, a ‘great disillusionment’, as the Irish historian Dr. Pat Walsh termed it, set in. Sinn Féin won 73 seats but every elected member refused to take their place in Westminster. The ‘civilisation’ and ‘self-determination’ for which thousands of Irishmen died in the war, remained an illusion whose realisation the Secret Elite resisted. When the votes across Britain were counted, Lloyd George reigned supreme, and Germany was to be starved.

Lack of food was indeed the weapon of war which had ultimately brought Germany to her knees. The naval blockade, which had latterly been applied with ruthless efficiency, destroyed any prospect of a dignified recovery. But Britain could hardly provide sufficient food for her own people in 1918. All Europe faced a range of hardships from bare sufficiency to utter desperation. The controller-general was America; American surpluses; American largesse. The old world powers were wounded, but not yet prepared to give way to the new power across the Atlantic. They were hyper-sensitive to, as they saw it, the American presumption that they could dictate Europe’s economic survival without consultation and joint decision-making. [4] But America had food and food was power.

With the authority granted to him by Congress on August 10, 1917, President Woodrow Wilson had created the U.S. Food Administration. [5] He also established two subsidiaries, the U.S. Grain Corporation and the U.S. Sugar Equalization Board. The man placed in control was the same trusted agent whom the Secret Elite had charged with running the Belgian Relief scandal. [6] Herbert Hoover lobbied for, and was given, the job of head of the U.S. Food Administration. His candidature was backed by the bankers and financiers, the J.P. Morgan Empire and the British political elite who had facilitated the sham Belgian Relief organisation in order to feed the German army. According to the Congressional Archives, Hoover made it clear that a single, authoritative administrator should head the organisation, not a board of directors. Just as in Belgium, he demanded and was given full control.

As head of the U.S. Food Administration, Hoover became the food dictator. [7] The presidential powers which Wilson had been given by Congress to regulate the distribution, export, import, purchase, and storage of food were vested in Herbert Hoover. He oversaw federal corporations and national trade associations; he demanded the cooperation of local buyers and sellers. He called for patriotism and sacrifices across every state that would increase production and decrease food consumption. Above all he controlled the prices, the supply, and for as long as he could, tried to moderate the demand for food in America. Hoover was, de facto, chief-executive of the world’s first multi-national food corporation.

Herbert Hoover was an astute communicator, able to call on his many friends and colleagues in the American press. Under his direction, the Food Administration, in league with the Council of Defence in the United States, urged all homeowners to sign pledge cards that testified to their efforts to conserve food. Coercion plus voluntary self-discipline produced results. By 1918 the United States was exporting three times as much breadstuff, meat, and sugar as it had prior to the war. And Herbert Hoover controlled it all.

Before he left America to take charge of the food programme in war-strewn Europe, Hoover announced to the press that the watertight blockade had to be abandoned and Germany stabilised, otherwise he reckoned that there would be no-one left with whom to make peace. He ended with the warning; ‘Famine is the mother of Anarchy.’ [8] Arriving in London on November 21, 1918 to supervise and control the food provision in Europe, Hoover was given instructions from his British counter-part, Sir John Beale. As director of the Midland Bank, with wide political, financial and manufacturing connections, Beale had been put in charge of Britain’s Food Ministry. [9] Hoover’s version of events claimed: ‘Sir John Beale of the British Food Ministry called on me the day after I arrived and urged that I did not discuss the food blockade on Germany publicly any more as they were opposed to relaxing it “until” the Germans learn a few things.’ [10] Hoover may have thought he would be in charge, but the agents of the Secret Elite asserted their authority. The food blockade would continue until Germany had been suitably punished. The chosen instrument of ‘correction’ was starvation. That would crush Germany. Starvation.

Having conjured the monster they called ‘the Hun’, falsely blamed its leaders for causing the war, sacrificed an entire generation for an absurd lie, accrued vast debts to enrich themselves and continued to embellish their own propaganda into received history, sympathy for a starving people was not part of the Secret Elite agenda. Old friends played their part. 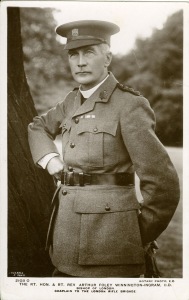 Arthur Winnington-Ingram, the war-mongering Bishop of London, reminded his congregation at Westminster Abbey on December 1, 1918 that it was essential that the Germans be punished. He invoked the propaganda surrounding Edith Cavell’s execution, [11] the tragic memory of the 10,000 gallant men of the merchant marine lost at sea, of hospital ships sunk, of women and children drowned and prisoners of war who had survived in half-starving conditions. His message was far from subtle. Punishment, he ranted, was warranted ‘for the greatest crime committed for a 1,000 years’. Indeed. His bitter logic warned that should the German culprits be let off, the moral standard of the world would sink. In triumphant conclusion the good Bishop pronounced, ‘God expects us to exact punishment’. [12] His blatant, vulgar lies were unchristian, but at least consistent with the bitter sermons he had preached since the war began. [13]

And the poisonous propaganda of the war years hardened hearts and made the final act of malice much easier for the agents of the Secret Elite. After the Daily News carried a report from a Swedish correspondent in late November which showed that as many as 95 per cent of the population in some parts of Germany had been living in approximate starvation for a least two years, [14] the cry of ‘Hun-trickery’ found popular voice. [15] Take, for example, Millicent Fawcett, trade union leader, suffragette and outspoken feminist. 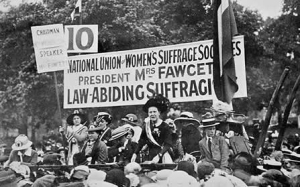 She made public an appeal she received from the President of German Women’s Suffrage Society imploring her to use her influence to stop the blockade ‘because millions of German women and children will starve.’ Unmoved, she dismissed the request as typical of German propaganda, blaming the shortages on German submarines whose ‘dastardly actions had never been criticised by any German, man or woman’. Fawcett quoted a claim by Herbert Hoover, ‘the American food expert’, that ‘Germany still had a large proportion of this year’s harvest available’, and consequently, there was no likelihood of starvation for any part of the population for many months to come.[16]

Such stories abounded. It was claimed that Berlin’s bread ration had been increased and ‘is better than in Holland.’ [17] The Northcliffe press railed against ‘impenitent’ Germany and in an attempt to damn the country to further deprivations, The Times correspondent in Cologne described his view of the German mentality so perfectly that he unwittingly captured the truth. According to his report the Germans believed: Germany is beaten, but so would England have been beaten if the whole world had combined against her. The German nation from the first had been fighting in self defence, otherwise it could never have held out so long. Both France and England would have given in long ago if they had such privations to bear as the Germans have endured. We firmly believe this war has been a war of aggression against us by Russia, a force to whom England joined herself seeking an opportunity to destroy a formidable rival. [18]

Pause for a second, please. This short paragraph encapsulated the central truth. Germany had been fighting for its survival in self defence; Britain had been fighting to crush ‘a formidable rival’; it had been a ‘war of aggression’ against Germany.[19] The British journalist was annoyed that he did not find ‘intelligent, influential Germans’ disillusioned or repentant. His message was unequivocal. The German spirit remained untamed. The Northcliffe press spun the lie that that the German people expected the Allies to forgive-and-forget and would ‘wipe the slate clean’ of all that happened during the war. This rival, they contended, had to be crushed by fair means or foul … and all is fair to the victors of war. Let Germany starve.