We are lied to. We know that more than ever today, but the lies and misrepresentations about the first World War have been accepted as truth. Arm yourself with the awful facts. 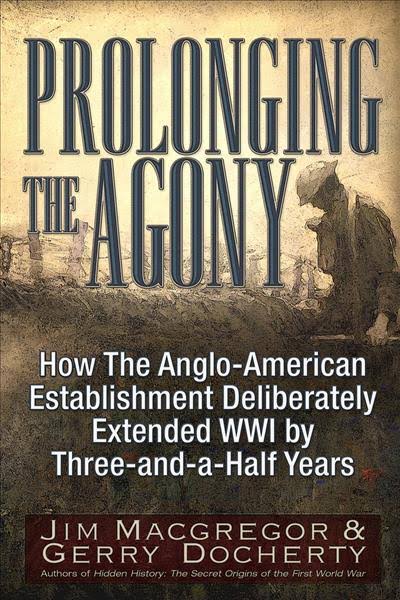 Part Two in the Hidden History series by Gerry Docherty and Jim Macgregor.

At last, having spent ten years working together on the origins and management of the First World War, our second book, Prolonging the Agony, How the Anglo-American Establishment Deliberately Extended WW1 by Three-and-a Half Years, has been published, and is available to our readers from TrineDay in the U.S. and Amazon and other book sellers across the world.

It had never been our intention to divide the history into two parts, but our original publisher, Mainstream of Edinburgh, convinced us that it was the best way forward. Mainstream was sold to Random House shortly after Hidden History, The Secret Origins of the First World War was published, and this proved problematic for us. Random House declined to either promote the book or take up the option for our second book. However sales remained strong and Hidden History was translated and published in both German and French. A Swedish edition is also currently being considered. To our delight TrineDay in Oregon offered to publish Prolonging the Agony and we are indebted to Kris Milligan and his team for encouraging and supporting us. It is heartening that within weeks of the book’s release, both the German and French publishers have indicated that they will also be publishing it.

So what is it about?

Prolonging the Agony lays before the reader a vast amount of evidence which reveals how enormously rich and powerful men in Britain and the U.S. deliberately prolonged WW1 while reaping even greater fortunes from it. It retraces the major lies and malevolent propaganda generated in Britain and America to justify war against Germany, and the reason it was prolonged beyond the spring of 1915 in order to crush her. The Secret Elite, the cabal which worked endlessly to bring war to Europe with a view to creating a new world order, was responsible. To cover their tracks, the elites and their agents ensured that a false history was created to justify all that happened. Prolonging the Agony deconstructs that false history page by page. 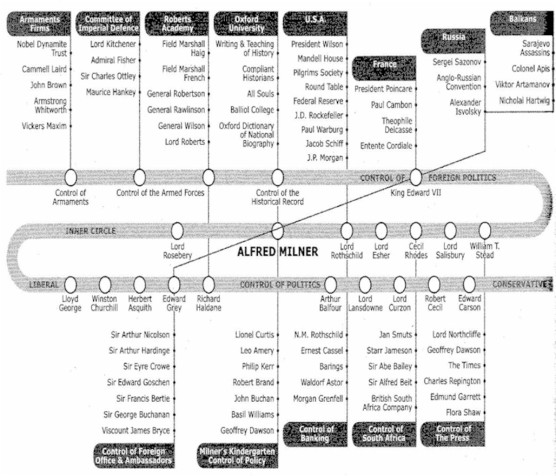 It examines in detail how the British government borrowed on an unprecedented scale from Wall Street bankers to fund the munitions of death. The links between leading players – such as the Rothschild banking family and their JP Morgan banking associates on Wall Street – were formalised to a point where the British economy was literally handed to this money-power cabal. We demonstrate the extent of the anti-German lies and propaganda emanating from Oxford University, the academic home of the Secret Elite in Britain, and how it lead to millions of young British men enlisting to fight under totally false pretences . Winning the hearts and minds of the American public, so that they aligned with the financiers, proved a more difficult task, but the fact that the United States would enter the war was guaranteed from the outset by their place-man in the White House, President Woodrow Wilson and his minder, Edward Mandel House.

Lies concocted in 1914 to blacken Germany in every way are still circulated today as fact. This False History lives on through the British Court Historians who repeat the nonsense. We prove absolutely that while Nurse Edith Cavell – the great British heroine of the war who was executed by a German firing squad in Belgium in 1915 – was indeed a brave patriot, she was secretly and intimately associated with a Belgian spy ring linked to the British Secret Service. Edith Cavell and her Belgian associates helped repatriate hundreds of British and French soldiers who were stranded behind enemy lines in the first months of the war. They also passed vital information about German deployment to the  War Office in London. But Edith threatened to endanger the secret agreements about food supply by revealing the scandal through he connections with the Times. For generations that fact was buried so that her execution would look like an act of brutality by the German commanders against an innocent, humanitarian nurse. The truth is otherwise.

In a similar vein, lies and propaganda were circulated about the sinking in 1915 of the ocean liner Lusitania by a German U-boat. Received history turned this act into German malevolence in order to cause outrage in America and swing public opinion there towards the Allies. 1,195 lives were lost including 140 Americans. Only now, after sustained detective work by Mitch Peeke and his Liverpool team in tracking down the cargo manifest of the Lusitania, are the authorities in both Britain and the U.S. obliged to admit their complicity in creating and maintaining false accounts of the sinking. The recently uncovered manifest proves that the ‘passenger liner’ was secretly carrying many thousands of rounds of ammunition and tons of U.S. explosives to Britain. It also proves that the German authorities were right. Britain and America were flouting the clear-cut regulations about neutrality. Their well-publicised advice to passengers to avoid the Lusitania was both justified and ignored. Shockingly, elements within the British Admiralty knew full well that the German U-boat was waiting in the exact path of the Lusitania as she passed the southern coast of Ireland, yet withdrew her naval escorts and failed to warn her captain. Why? We believe they were complicit in the sinking for their own purposes. 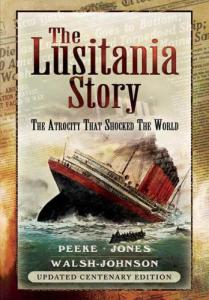 Bad as this was, our sustained research through documents, records, and published books and texts which were dismissed in the post-war years, turned our dismay to utter disgust. Again and again we found secret agreements, understandings, practices and deliberate actions taken in order to prolong the war and prolong the agony. And it is this fact, which was repeatedly stated from many quarters during the conflict, which hit us hardest.

We have amassed proof of the unprecedented scale on which the war was unnecessarily prolonged. It could have been drawn to a conclusion by December 1915 and millions of victims would have been spared the misery of mutilation or horrendous death. But the war was prolonged mercilessly so that profits would surpass the dreams of Midas and Germany crushed as a rival.

Amongst many disturbing examples, Prolonging the Agony examines the scandal of the French Briey Basin iron and steel mines and forges which the French army could either have occupied on the first day of the war or destroyed, in order to stop them falling into German hands. Despite repeated calls for the French army to destroy the forges, the French authorities would not allow it. An expedition to bomb the forges was slapped down by the French High Command. Who gave the orders? Who made the profits? To whose instructions was the French government answerable? It was a scandal which has been swept under the carpet to avoid accountability. Had Briey been destroyed, Germany would not have had the raw materials and munitions to fight beyond 1915.

What is the truth of the so-called blockade of the North Sea passages which allegedly starved Germany of its resources? A truly brave and remarkable small fleet comprising very old vessels, none of which was built for the high seas task, sat out in the unforgiving Atlantic and North Sea to stop all contraband getting into Germany from August 1914 onwards. What happened? Virtually every ship they brought into port under escort was allowed to continue its journey by order of the Admiralty in London. Yet the public and parliament believed that Germany was being starved of its war necessities. They believed the lie because Winston Churchill said a full blockade was in place and that Germany would surrender in nine months. 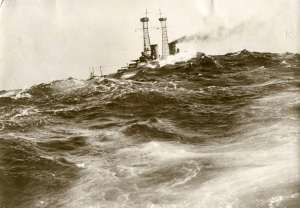 The inner-elite of the British cabinet had no intention of ending the war until Germany was crushed … not just beaten. The facts presented are drawn from archived evidence and Admiralty papers. Our thesis endorses and builds on the outrage expressed by the Admiralty’s representative in Scandinavia during WW1, Naval Attaché Rear-Admiral Consett. He detailed how  the Allies were secretly supplying Germany through Scandinavian ports and prolonging the conflict. Had a blockade been properly undertaken the war would have ended by 1915. What was a going on? Prolonging the Agony explains precisely that.

We also raise the issue which is omitted from mainstream analysis: where was Germany procuring her vital oil supplies? She had no natural reserves herself, and her access to oil could easily have been stopped. Our book investigates the multiple abuses in oil provision and traces the ownership of these oil fields. The compliance of the owners and shareholders, British and American, demonstrated the importance of war profits at any cost.

To hell with your countrymen who had to be sacrificed.

2 thoughts on “Prolonging The Agony 1”