We have come to the end of our blogs covering the running of the First World War by the Secret Elites in London and then, as the money-power flexed its muscle, America. The whole expose is recorded in Prolonging the Agony, which is now available through Amazon and can be ordered by quality bookshops. 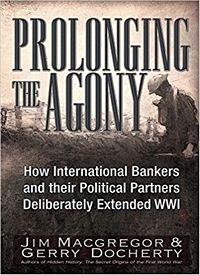 Though this is by no means the end of the line, we will take a break from the weekly blogs but hope to release occasional pieces as evidence is slowly unmasked across the world.

Thanks to everyone who contributed in any way, to our regular readers whose encouragement and contributions we greatly appreciated. You guys care was we do. Where circumstances allow point doubters to our blogs or either of the major works, Hidden History, The Secret Origins of the First World War and, just released, Prolonging the Agony, How the Anglo-American Establishment Deliberately Extended WW1 by Three-and-a-Half Years.

Take care in a world where we are still lied to by governments, as was the case one hundred years ago.