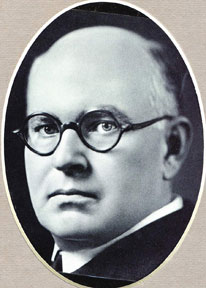 Having successfully established Lenin and Trotsky, Wall Street’s chosen men, to lead the Bolshevik Revolution, William Thompson returned to the United States before Christmas 1917, leaving behind as head of the Red Cross mission, his second-in-command, Raymond Robins. Robins became the direct intermediary between the Bolsheviks and the American government, and was the only man whom Lenin was always willing to see. [1] He was an agent of the Secret Elite, a protégé of Edward Mandell House, and could list President Wilson as an enthusiastic friend. Woodrow Wilson had intervened to provide Trotsky with a passport to return to Russia to ‘carry forward’ the revolution and withheld American support for the crumbling provisional government, led by Alexander Kerensky. Wilson had expressed his personal enthusiasm for the Bolshevik Revolution and on 28 November 1917, ordered no interference from America. By that he meant no other interference than that which had Secret Elite approval. Woodrow Wilson’s administration sent 700,000 tons of food to Russia which not only saved the nascent Bolshevik regime from certain collapse, ‘but gave Lenin the power to consolidate his control’. [2]

The United States could have exerted its influence to help bring about a free Russia, but its decisions were controlled by the international bankers who would have accepted a centralised Czarist Russia or a centralised Marxist Russia, but not a decentralised free Russia. A corrupt system under the Czars was replaced by a corrupt system under the Bolsheviks. [3] Plus ca change. The political hue of government, any government, was irrelevant to the bankers, provided they controlled the politicians. And that control was considerably more straightforward when dictated through a centralised government in a highly organised state.

The British wing of the Anglo-American elites gave similar support. Lloyd George’s government nurtured unofficial relations with the Bolshevik regime, and concurrently close relations with the American Red Cross Mission, through Bruce Lockhart, a young Russian-speaking Scottish diplomat. Lockhart was chosen for the post, not by the Foreign Secretary or the Foreign Office, but personally by Secret Elite supremo, Alfred Milner. Bruce Lockhart later recounted that before his departure for Russia, the great man (Milner) talked to him almost every day and dined with him at Brooks’s gentlemen’s club in Westminster. Utterly devoted to Lord Milner, Lockhart noted that he (Milner) ‘believed in the highly organised state.’ [4] Milner’s young agent quickly became closely linked with Raymond Robins and the Wall Street/Red Cross mission in Petrograd. 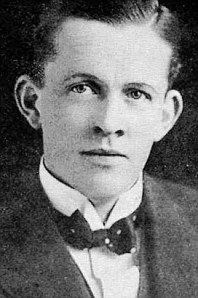 Lockhart realised that Raymond Robins was already established as the intermediary between the Bolsheviks and the American Government. Although Robins knew no Russian and very little about Russia, he had set himself the task of persuading President Wilson to formally recognise the Soviet regime. His assistant, Michael Gumberg, supplied him with the necessary background information to justify this action. [5] Michael Gruzenberg, from Yanovich in Belarus, a man of many aliases, was the chief Bolshevik agent in Scandinavia. He worked closely with Parvus and Furstenberg, and was a ‘confidential adviser to the Chase National Bank in New York.’ This dual role was known to and accepted by both the Soviet and his American employers’. [6] When the Bolsheviks began to loot Russia in earnest, Gumberg took diamonds stitched into his brief-case for sale in the United States. [7] He was an international agent who ‘worked for Wall Street and the Bolsheviks’. [8] This joint role may appear a confusing impossibility today, but in 1917 that was exactly what he represented. Wall Street and Bolshevism.

Michael Gumberg was close to both highly privileged Secret Elite agents, Lockhart and Robins. Bruce Lockhart boasted that: ‘We had no difficulty in seeing the various Commissars. We were even allowed to be present at certain meetings of the Central Executive Committee.’ [9] Lockhart met Trotsky on a daily basis, was trusted with his private telephone number and could speak to him personally at any time. [10] Professor Antony Sutton stated that Alfred Milner had primed Lockhart for the Bolshevik takeover, which begged the question as to how Milner knew in advance that there was going to be such an upheaval, given that he had denied any knowledge when he returned to London from his earlier mission in St. Petersburg. [11] Milner briefed the young Scot on a person-to-person basis and sent him on his way with instructions to work ‘informally’ with the Soviets. [12]

Two agents, Robins from America and Lockhart from Britain, had been sent into Russia by the Secret Elite and operated close to Lenin and Trotsky, both of whom had also been sent to Russia by the Secret Elite, and were consequently admitted into the heart of the Bolshevik government. The Bolsheviks knew exactly who they were and whom they represented, and vice versa. Lockhart recounted a party he gave for embassy staff and other prominent officials in St Petersburg: ‘My chief guest was Robins. He arrived late having just come from Lenin. …During luncheon Robins spoke little, but afterwards … he made a moving appeal for Allied support of the Bolsheviks’. [13]

By this means, the official diplomatic representatives of the British and American governments were neutralised and effectively replaced by unofficial agents of the bankers sent to support the Bolsheviks. The reports from these unofficial ambassadors were in direct contrast to pleas for help addressed to the West from inside Russia. Protests about Lenin and Trotsky who had imposed the iron grip of a police state in Russia were ignored. [14] Many Russians had experienced hunger and hardship under Czarist rule, but many millions more would die after the revolution from hunger, by the bullet, or from exposure in the frozen hell of the Siberian arctic wastes. A starving, withering wasteland loomed on the horizon as Lenin and Trotsky allowed the gold and treasures of Russia to fill the vaults of the western bankers who had financed, promoted and protected them. 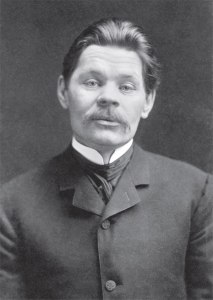 Whatever money flowed into Russia by way of payments from Wall Street, was used to crush dissent and finance the ‘Red Terror’. The Russian writer Maxim Gorky, nominated five times for the Nobel Prize in Literature, likened it to an experiment conducted on the tormented, half-starved Russian people. ‘They are cold-bloodedly sacrificing Russia in the name of their dream of worldwide and European revolution. And just as long as I can, I shall impress this upon the Russian proletarian: ‘Thou art being led to destruction! Thou art being used as material for an inhuman experiment!’ [15] How right Gorky was. The corrupt, autocratic system of the Czars had been replaced by a totalitarianism that was even more corrupt and evil. Having seized control from the Provisional Government, the Bolsheviks won less than a quarter of the votes in the first elections for the Constituent Assembly. Lacking popular support, they knew that the only means by which they could retain power was through a reign of terror. They made no attempt to justify their savagery, claiming that ‘the revolutionary class should attain its end by all methods at its disposal if necessary, by an armed rising: if required, by terrorism.’  [16]

And their dictatorship surpassed the worst nightmares of Czarism. Grigory Zinoviev, chillingly expressed what was to be done: ‘To overcome our enemies… we must carry along with us 90 million out of the 100 million of Soviet Russia’s population. As for the rest, we have nothing to say to them. They must be annihilated’. [17] Ten million Russians were to be ‘annihilated’ to achieve that purpose. The Bolsheviks created the much feared police force, the Cheka, to conduct an utterly ruthless campaign of terror against all political dissent. 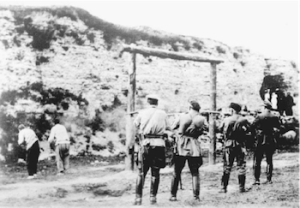 With Trotsky at the head of the Red Army, and his old friend Moisei Uritskii in charge of the Cheka, the voice of reason was choked into compliance. The Cheka crushed peasant revolts in various parts of the country after the Red Army emptied their grain stores without payment. Strikes by the proletariat were mercilessly suppressed. [18] Ironically, hundreds of striking workers at the Putilov factory from where the revolution originated, were executed without trial. In a nutshell, the Bolsheviks were utterly obsessed with ‘violence, dictatorship and coercion.’ [19] But the blood that was spilled in Russia meant nothing to the money-power in Wall Street. Profits flourished.