The infamous Gallipoli campaign of 1915 was set up to fail. 180,000 allied soldiers were sacrificed, wounded or dead, for a strategic policy which served the imperial designs of the British Empire by failing. This is the essential truth which the next series of blogs will prove. Over the last century, in both Britain and Australia, Gallipoli has been turned into a heroic-romantic myth; [1] a myth promoted by court historians and pliant journalists in order to hide the stark truth. It was a ruse, a sop to the Russians to keep them out of Constantinople in the belief that allied forces would capture the city on their behalf. Put into the hands of incompetent generals and admirals, starved of determined leadership, ill-equipped, ill-advised and certain to fail, the attack on the Dardanelles obligated the Russians to turn back to the eastern front and wait. As an integral part of the imperial strategy, Gallipoli was a stunning success.

So much criticism has been heaped on this oft-termed ‘sideshow’ that the real reason behind Gallipoli has been successfully buried in the horror of its consequences. Allied forces, including the fresh recruits from Australia and New Zealand who rushed to save the Empire, the famed Anzacs, suffered tragic losses in an ignominious defeat at the hands of a much maligned Turkish army on the beaches and slopes of the Gallipoli peninsula. Mainstream historians attributed the disaster to a combination of gross errors which included shockingly poor preparations, underestimating the preparedness and fighting capacity of the the Turkish army, the impetuosity of Winston Churchill, and inept naval and military leadership in the field. Trevor Wilson, professor of history at Adelaide University wrote in 1986, ‘The manner in which Britain’s leaders set about it (Gallipoli) would defy comprehension.’ [2] There was indeed incompetence on several levels that defied belief, but the true reason for the Gallipoli campaign and why it failed has been deliberately suppressed.

Like their counterparts on the Western Front, the shocking sacrifice was of minor concern compared to the political necessity of keeping the Russians out of Constantinople and the oil rich parts of the Ottoman Empire that Britain intended to carve up for herself. Of the many ingenious slights of hand with which perfidious Albion manipulated geo-politics over the centuries, keeping Russia in the war but out of Constantinople was one of the most effective and important. 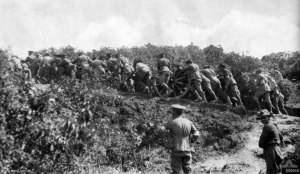 It proved a disaster for those eager young men who were pitched into the nightmare, unprepared, inappropriately led and without the slightest idea why their lives were deemed so worthless; its towering success came after the war when the Ottoman Empire was broken up to the great advantage of British Imperialism.

We are not alone in questioning the official account of Gallipoli as simply a list of pathetic failures. Harvey Broadbent, the highly respected Australian historian and Director of the Gallipoli Centenary Research Project, voiced the possibility that the British and French Governments of 1915 ensured that the Dardanelles and Gallipoli Campaign did not succeed because it was ‘a ruse to keep the Russians in the war and thus the continuation of the Eastern Front.’ [3] Broadbent accepted that his proposition was controversial. He meant it to challenge the conventional history of the Gallipoli Campaign which has focused for a century on ‘ill-conceived folly by Winston Churchill and Lord Kitchener and a bungled tactical affair conducted by incompetent senior commanders and executed by inexperienced junior commanders, officers and troops.’ [4]

When he first discussed his thesis with fellow Gallipoli historians, Broadbent was subjected to disagreement which ‘came perilously close to abuse.’ His difficulty was that that while circumstantial evidence supported his claim, there was little or no documentary evidence to corroborate it. Documents had been lost. Unexplained ‘gaps have appeared in special collections of critical events at crucial times of the campaign’. [5]

Missing documents and ‘gaps’ in collections at ‘crucial times’ were by no means confined to the Gallipoli disaster. Our book, Hidden History, The Secret Origins of the First World War, includes an entire chapter detailing exactly how the Secret Elite, the cabal in London responsible for the war, systematically burned, concealed or removed documents which revealed their guilt. Huge swathes of Cabinet and Committee of Imperial Defence records remain ‘missing’ and official memoirs were carefully scrutinised, censored or rewritten. There was a systematic conspiracy by the British government to cover all traces of its devious machinations. The gaps are breathtaking, and no effort has ever been made to explain what happened to them. [6] Recently it was revealed that hundreds of thousands, perhaps millions, of official records from around the time of the First World War still remain inside barbed-wire and high-security protection at a secret location in Hanslope Park in Buckinghamshire. [7]

A century on, and we still cannot be trusted with the truth. Evidence, cross referenced from both primary and secondary sources, forms the bedrock of all historical research, but how are we to reach a balanced judgment and support an assertion when the evidence has been concealed or destroyed? Is circumstantial evidence sufficient? It is surely appropriate to look to legal precedence. Where direct evidence of a corroborated eye-witness account is lacking in the law courts, indirect circumstantial evidence such as DNA, forensic reports or fingerprints are admissible and the cable analogy employed. A cable is made up of many strands which if taken individually are not particularly strong, but as more of the strands are intertwined, the cabal grows stronger. Serious offenders are regularly convicted on circumstantial evidence alone. Since so many of the official records and accounts relating to Gallipoli are missing, we have addressed the burden of proof by building an exceedingly strong ‘cable’ of evidence, sometimes circumstantial, but often clearly documented, which proves that Gallipoli was deliberately set up to fail.

The heroic-romantic myth, so integral to the cult of remembrance, has survived, perpetuated by compliant historians and politicians. As the Australian defence analyst and former army officer, James Brown, has written, Gallipoli and the Anzac sacrifice, is like a magic cloak which ‘can be draped over a speech or policy to render it unimpeachable, significant and enduring.’ [8] Norman Mailer pointed out that ‘Myths are tonic to a nation’s heart. Once abused, however, they are poisonous.’

Over the course of the next two months we will deconstruct that myth and lay before you the evidence of the grave crime that was Gallipoli.

1 thought on “Gallipoli 1: The Enduring Myth”