The true story of Goeben’s escape is very different from that presented by the mainstream. Historians blandly state that Churchill and the British government knew nothing of the secret agreement that Turkey signed with Germany on 2 August, or that the German warships were heading towards Constantinople. Apparently, no-one even considered the possibility that Goeben and Breslau were engaged in a political mission that would profoundly affect and prolong the course of the war. [1] In fact, British Intelligence had for some considerable time intercepted messages between the German embassy in Constantinople and Berlin. It is quite astonishing that the treaty between Turkey and Germany was kept secret from most of the Turkish cabinet, yet British and French Intelligence knew of it almost at once. [2]

On 3 August the Kaiser advised King Constantine of Greece by telegram that the Turks had thrown in their lot with Germany and that the two German warships presently in the Mediterranean would proceed to Constantinople. The strongly pro-British Greek prime minister, Elephtherios Venizelos, passed this information to the British charge d’affaires who in turn cabled the news to London. [3] Lest there be any doubt, King Constantine also shared the information in confidence with Admiral Kerr of the British naval mission in Athens. [4] Thus key officials in both the Foreign Office and the Admiralty knew about the enemy’s intention before war was declared.

Indeed it is perfectly possible that the plans approved by Berlin were known in London before Admiral Souchon had sight of them on board the Goeben. Public Records Office files in London reveal that naval intelligence had decrypted the encoded radio-message sent from Berlin to Souchon on 4 August. The brief instruction read; ‘Alliance concluded with Turkey, Goeben and Breslau proceed at once to Constantinople.’ The information which was passed from Greece on 3 August was instantly confirmed by the encoded radio-message on the 4th. London knew that Souchon had been instructed to set course immediately for the Dardanelles . [5] There was no ambiguity.

There was another source which constantly monitored all that was happening in and around Constantinople. By 1914 Russia’s intelligence on Turkey was uniformly good and manifestly better than that of Britain. As Souchon headed across the Mediterranean, ‘the Russians knew perfectly well where he was going and why.’ [6] Russian Foreign Secretary Sazonov had informants inside the Ottoman cabinet meetings, and Mikhail Girs, the Russian Ambassador at Constantinople, was exceptionally well informed. [7] Given the dire consequences for Russia if the Goeben and Breslau sailed unmolested into Constantinople, and the fact that they had no warships of their own in the Mediterranean to stop them, it is inconceivable that the Russian Foreign Ministry would not have immediately passed the crucial information to British Intelligence. Indeed Sazonov was in ready contact with Sir Edward Grey at the Foreign Office, demanding and expecting effective action. The German cruisers had to be sunk. Russian imperial ambition required the immediate removal of the menace, but to further Britain’s own geopolitical strategy, the Secret Elite had to ensure that Goeben and Breslau reached their destination safely. Their strategy enabled Turkey to replace the dreadnoughts which Britain had commandeered with two German warships. At a stroke, the Russian Black Sea fleet was effectively neutralised and Russia kept out out of Constantinople.

The crucial information which the Admiralty knew about Souchon’s inentions was withheld from the Royal Navy squadrons in the Mediterranean, and most of the information they received from London ‘was either useless or inaccurate.’ [8] Milne apparently laboured under the impression that Souchon intended to turn back west after coaling at Messina. Appearances can be deceptive. Was Milne part of the conspiracy? It would certainly explain some of the bizarre events in this strange tale. It would account for the fact that the three cruisers which closely shadowed the Goeben, handicapped by her defective boilers, ‘lost’ their prey just a few hours before the 11 pm declaration of war. It would explain why he positioned the cruiser squadrons to the west of Sicily, and by the island of Cephalonia, while placing only one totally inadequate warship to guard Souchon’s escape route to the east. Had it been sent by semaphore, Milne’s message to Souchon could hardly have been clearer; ‘We are not preventing your passage to the Dardanelles’. Look again at the geographic position of the hunters and the hunted. The Germans were prevented from sailing west into the Mediterranean, or north to the Adriatic. The reasonable conclusion such tactics warrant is that Souchon was purposefully being shepherded towards the Aegean and Constantinople. This suggestion is not as outrageous as it might first appear. Admiral Milne was a favourite of the British monarchy and had been close to the late King Edward VII, a man who was himself intimately linked to the inner core of the Secret Elite. [9]

When Goeben and Breslau left Messina on 6 August, the proverbial fly in the Admiralty’s ointment was Captain Howard Kelly in HMS Gloucester. Although comprehensively outgunned by Goeben, Kelly stubbornly trailed the German cruisers east. Milne signalled Gloucester to give up the chase. Why? Was it to protect the Gloucester or to allow the German ships to disappear into the safety of the eastern Mediterranean? Whichever, Kelly defied the Admiral’s instructions and continued in pursuit. Souchon was forced to order Breslau to confront the small British cruiser, but the defiant Gloucester opened fire. Eventually all three warships engaged in the fight, but no hits were scored by either side. At 4.30 in the afternoon, when Goeben rounded Cape Matapan and entered the Aegean Sea, the fearless Kelly finally turned back. At the end of the day he was the only British naval officer to emerge with any credit. Strangely, rather than facing a court-martial for disobeying an order from the Admiral, Kelly was given a CB (Companion of the Bath) and went on to enjoy a glittering naval career.

Early on 7 August Admiral Milne informed the Admiralty that as soon as his three battle cruisers, Inflexible, Indefatigable and Indomitable, and the light cruiser Weymouth had completed coaling at Malta he would follow Goeben and Breslau into the Eastern Mediterranean. He received no response. Despite all the intelligence it held on Goeben’s plans and whereabouts, Milne allegedly remained ‘entirely without information’ as to the whereabouts and intentions of his opponent. Later that afternoon, at 5:40, the Admiralty received another signal from Milne repeating his intentions. At this point the saga became even murkier. Evidence ‘unfortunately disappeared’ from the Admiralty file on this exchange. [10] Despite two reports from different sources that Goeben had been seen at the Aegean island of Syra and had asked to coal, these were filed away at the Admiralty without comment and the information was not passed to Milne. The only report he received was that Goeben had passed Cape Matapan on the 7th, intelligence that he had previously sent himself to the Admiralty. [11] 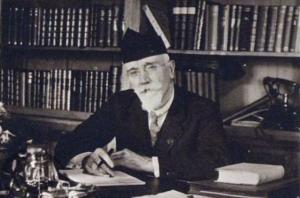 Desperate for coal, and confirmation that he could sail into the Straits, Admiral Souchon lingered in the Greek archipelago for approximately sixty hours, during which ‘the British Mediterranean fleet had ample time to make up for all previous errors and catch up with their prey.’ [12] And herein lies another conundrum. After his escape from Messina, Souchon requested permission from the Greek government to take on much needed coal when he reached the Aegean. Had they denied him fuel, or procrastinated long enough for the Mediterranean fleets to catch him, the matter might well have ended there and then. Instead, prime minister Venizelos ‘agreed at once’ to release 800 tons from the sequestered stock of German coal at Piraeus. The British Foreign Office later suggested that the staunchly pro-British Venizelos, a friend of Lloyd George, had simply ‘acted out of a desire to be fair to all sides.’ [13] What rubbish. British intelligence knew well in advance where Souchon was headed, and what he required in order to escape to Constantinople. They opened the doors; they approved the fuelling; they ensured that the German ships continued in comparative safety. Most importantly, they hid all this from the Russians.

Venizelos had immediately informed Rear-Admiral Mark Kerr, that Goeben would rendezvous with a coal ship at Denusa in the days ahead. Kerr, a staunch British patriot, had previously been seconded from Britain to head the Greek navy. We are asked to believe that he did not pass on the information about Goeben’s whereabouts to London. Incredible. Considered from another angle, Kerr, like the Admiralty, knew that the Goeben and Breslau had been ordered to Constantinople. King Constantine had personally shown him the telegram of 3 August from the Kaiser authorising this. [14] That he kept it to himself, or lingered long before eventually telling the Admiralty, is fanciful. It was part of the smoke-screen, part of the post-event blame-game which deflected any focus on the British Admiralty or Foreign Office. Above all else, under no circumstances could Russia be made aware about the depth of British culpability in this charade of a chase.

While Souchon was more or less marooned in the south Agean Sea, Admiral Milne took his three heavy cruisers and a light cruiser east towards the Aegean. He headed in a direction that would have led him to the German ships. En-route he received a message from the Admiralty that Austria had declared war on Britain. In accordance with long-standing and explicit orders detailing what he should do if Austria entered the war, Milne broke off his pursuit and headed north for the Adriatic to blockade the Austrian fleet. He was later informed that the report was false and back-tracked east, but 24 hours had been lost and Milne spent the whole day in a fruitless search of the western Aegean. Thus historians could record that Souchon ‘might well have been searched out and destroyed had not the Admiralty sent Milne on August 8th the false report…’ [15] According to Winston Churchill, the misinformation was instigated in error. ‘ The fates moved a blameless, punctilious Admiralty clerk to declare war upon Austria.’ [16] Oh, dear; how calamitous. A ‘blameless’ clerk just happened to send Admiral Milne, and Milne alone, an erroneous message to the effect that Britain was at war with Austria. Inside this unfortunate misunderstanding, secret orders immediately took effect and changed, not just Admiral Milne’s course, but the course of history. Are you prepared to accept that? It is a wonder that the Russians did.

Against overwhelming odds, and thanks to the Secret Elite, Goeben and Breslau entered the Dardanelles at 5pm on 10 August and arrived unscathed at Constantinople the next day. According to the All Souls and Oxford historian CRMFC Crutwell, they carried with them ‘graver destinies than any other vessels in modern history.’ [17] They immediately rendered Russia’s ageing Black Sea fleet strategically useless. There would be no amphibious landing of Russian forces at Constantinople.  Sir Louis Mallet, the British ambassador to the Ottoman Empire, later revealed the truth when he stated that the presence of the Goeben and Breslau acted in British interests because they protected the Straits against Russia. [18] Russian Foreign Secretary Sergei Sazonov was furious. In a telegram to London, he raged that Souchon’s success was all the more regrettable because Britain could have prevented it. [19] Had he learned that far from preventing the ‘escape’, Britain had deliberately facilitated it, Russian involvement in the First World War would have been over immediately.

The Ottoman ambassador in Berlin telegraphed home: ‘Considering the displeasure and complications which a Russian attack on Constantinople would produce in England, the British navy having enabled the German ships to take cover in the Sea of Marmora, has, with the Machiavellianism characteristic of the Foreign Office, foiled any possibility of action by the Russian Black Sea Fleet. [20] And he was absolutely correct.